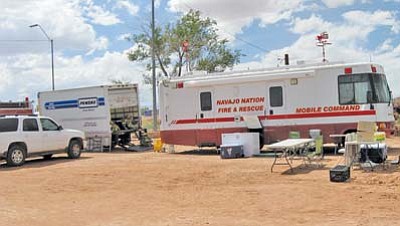 <i>Tyler Tawahongva/NHO</i><br> The Tuba City Fire Department is temporarily operating out of this mobile command unit located in front of the Tuba City Chapter House due to their firehouse being damaged by arson during the early morning hours of Aug. 5. A former volunteer was arrested in connection with the crime and is presently awaiting trial.

TUBA CITY, Ariz. - During the early morning hours of Aug. 5, the Tuba City Fire House was set on fire in what was later discovered to be arson. This was very a tragic event for the Tuba City Fire Department who is already working with very limited resources and a skeleton crew.

Apparently, while the firefighters were on call to an accident, a former volunteer snuck into the fire house, stuck a broom in the gas tank of one of the engines and set it ablaze. The firemen who responded to the call were unable to get through the rolling doors and eventually gained entry through the front door. Upon entering, crews noticed a smoldering punching bag. Upon further investigation it was discovered that one of the engines was damaged on the compartment side. According to Lt. Travis Becenti, it was determined that this was no accident.

The alleged suspect was later apprehended. The suspect did confess and is awaiting a court date.

The approximate value of the destroyed fire engine is approximately $270,000. Although insured, the engine is leased, so will not be replaced pending risk management claim handling procedures.

Currently the fire department is being temporarily housed in the Navajo Nation mobile command center in the parking lot of the chapter house. It will soon be moved to a location near Yellowman Park.

Becenti remarked that this act could be considered domestic terrorism due to the nature of the crime. Even though services have been restored to where it may have been at before the incident, this is considered a crime against the community since the fire department offers crucial life saving services.

Becenti also commented on the state of the fire department before the incident and wanted to bring attention to the fact that there are only two fulltime firefighters, and that according to national codes, there should be at least four firefighters available to respond to a call. The "two in, two out" protocol allows for two firefighters to go into a burning structure while the other two wait in case of distress. However, due to lack of funding, the department must rely on volunteers who are not required to respond to every call.

Becenti and his engineer have to volunteer after hours outside of their normal shifts. He makes the point that the police department has a full staff and that emergency medical technicians also have plenty of staff, so the fire department should be fully staffed as well. Since 60 percent of the calls are medical related, they are looking into ways of billing for services just as in larger cities. He commented that there may need to be a tax to fund the fire department.

Becenti has long had a fascination with firefighting and credits Everett Maloney and Bryce Brown for getting him into the field. He obtained a degree in fire sciences despite having to pay for his own certification training out of his own pocket. In one instance, he risked his life to save a person in a burning trailer on his own time. He was recognized for this brave accomplishment. He feels that the Tuba City fire department needs to get the necessary resources in order to do their job of saving lives more efficiently.

He hopes with the attention to the recent disaster the Navajo Tribe will find more resources for the community to rebuild the fire department and staff to more functioning levels.