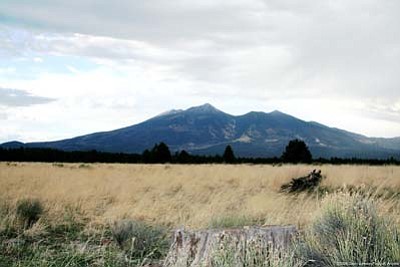 FLAGSTAFF, Ariz. - During the Flagstaff City Council's special meeting on Monday, Aug. 30, the Navajo Nation will once again adamantly oppose any and all expansion to the Arizona Snowbowl ski resort. A proposal currently sits before the City Council that, if passed, would allow Flagstaff to sell potable water to the ski resort for snowmaking purposes.

On July 21, the 21st Navajo Nation Council overwhelmingly voted in favor of Resolution CJY-34-10 that urged the Flagstaff City Council and Flagstaff Water Commission to "disapprove a proposed contract to sell potable water to Arizona Snowbowl for snowmaking on Dook'o'oslííd (San Francisco Peaks)."

Passage of the resolution reaffirmed the Navajo Nation's opposition to the expansion project and reaffirmed its disagreement to the further desecration of Dook'o'oslííd by the proposed use of treated wastewater for snowmaking.

A week later on July 29, a delegation consisting of Navajo Council delegates Thomas Walker, Jr. (Birdsprings/Luepp/Tolani Lake) and Raymond Maxx (Coalmine Canyon/Toh Nanees Dizi), delivered the official position to Council members. Walker and Maxx met with Council members Art Babbott, Celia Barotz, and Karla Brewster to further explain the Nation's official stance and the harm it would cause to the Navajo people.

Later that day, Maxx also delivered the official position to the Flagstaff City Water Commission during their special commission hearing at Sinagua Middle School in Flagstaff (see article below). The commission considered various options, including the use of direct reclaimed water (effluent) or indirect recovered reclaimed water (potable). The Commission ultimately voted 5-4 in favor of giving Flagstaff a committed option of either water source to the ski resort.

"By asking the Navajo Nation if we prefer potable or effluent water is essentially asking us if we are willing to negotiate our identity as Navajos; Dook'o'oslííd is inextricably tied to our identity, much like one's family members are part of one's identity," Walker stated. "It is like asking us to turn our back on a family member. As such, this is a matter that we cannot negotiate."