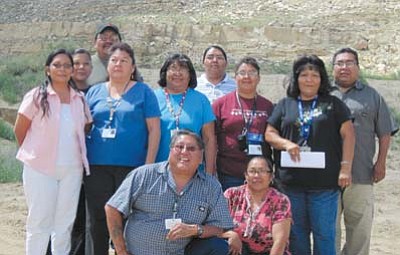 POLACCA, Ariz. - It has been just over two weeks since the Hopi Tribe formally declared a state of emergency for residents of First Mesa because of excessive flooding caused by torrential rains in residential, farming and graveyard areas in the Polacca area.

Roger Tungovia, Incident Commander for the Hopi flood disaster and his Hopi Emergency Response Team (HERT) were looking at a final week wind-down this week, having gone through the four stages of any disaster, which are "mitigation, preparedness, response and final recovery."

"Life and safety were the first line of priority needs for our community," Tungovia stated. "We have community members who are special needs, elderly and [others with] serious health issues, so we coordinated with our Hopi Health Department. Beatrice Norton and her community health responders worked around the clock..."

He added, "Our HERT team assisted in getting medication and community members to the hospital for their regularly scheduled appointments. The rest of our crew worked with outside agencies to get heavy equipment to move dirt, help sandbag and get fresh household use water for drinking and cooking."

As of last week, there were still two open manholes on top of the mesa and work is still being conducted to repair fresh water lines to make sure people have safe water to drink and use in their homes.

The Hopi Tele-communications office reported that there was extensive damage to phone and cable lines, but they had installed wireless to ensure residents continued to have phone access.

There were a number of gravesites compromised by the flooding as well. HERT coordinated their efforts with the Hopi Cultural Preservation Office to notify families to locate and restore affected gravesites.

One of the biggest repairs will be repairing water and sewer lines. According to Phoenix Indian Health Services, this new project will cost about $630,000.

Tungovia said that one of the primary responders to the state of emergency was Tiffany Ashworth of the Navajo County offices. The Navajo Nation, also provided sandbags and fresh water.