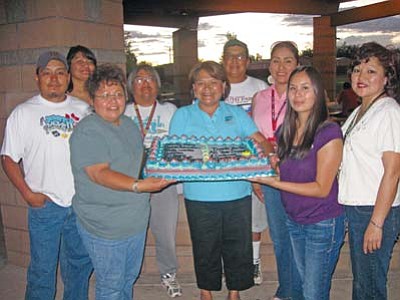 TUBA CITY, Ariz. - On August 5, Coconino County District 5 Supervisor Lena Fowler hosted a BBQ in appreciation for the many volunteers that contributed to the Fourth of July festivities. Many people and their families attended to enjoy hamburgers, hot dogs and music by DJ EFX.

Supervisor Fowler was very grateful that the community came together to bring the event together. She hopes to get a Christmas parade together this winter as a community event as well.

The public event was held to keep people in town during the Fourth of July weekend instead of traveling and gave people something to do in these hard times. She was very encouraged that everyone came out to support the event in any way they could and feels that with this type of support many other events are possible.

A community network event will be held at the Tuba City Chapter House at 10 a.m. tomorrow, Aug. 19 (see related article). Fowler encourages everyone from the community to attend and bring ideas to the table for future community events.

Before the celebration, Fowler visited the Tuba City fire crew who had just experienced an arson incident at the fire station (see article on Page A1). The July 4th event was held to benefit the fire department so it was unfortunate that such a tragic event occurred on the same day as the celebration.