Arizona visitors come for more than the tourist scene 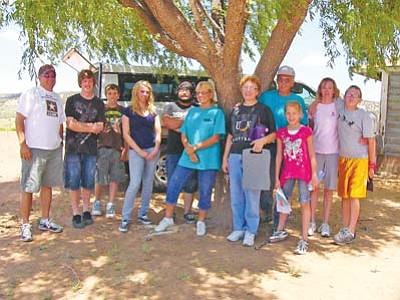 <i>S.J. Wilson/NHO</i><br> From left to tight: John Griffith, Jeff Crosby, Sean Griffith, Christin Thornton, Frankie Rocha, Sherry Miller, Deanna and Jerry Wright, Kyra Caulderwood, Jake Cornwell and Cheryl Cornwell are just some of the many individuals who came to the Navajo and Hopi reservations in July.

FOREST LAKE, Ariz. - Millions of tourists visit Arizona each year, but they aren't all here just to see the Grand Canyon or Lake Powell. Some come on a personal odyssey, seeking something more than a vacation. Some come to answer a higher call.

A large group of volunteers from communities in Arizona, Illinois and Pennsylvania gathered in churches in and around Forest Lake throughout July, taking on various projects and Vacation Bible School events.

Sherry Miller was one of nine people who came to the Navajo and Hopi Reservations from Pennsylvania; it was not her first trip.

"In 2006, I went to Hopi and helped build a building in Bacavi. In 2008 more of us came and built a kitchen in Pinon," Miller said. "I do physical work better than bible school."

Miller said that she was "terrified" to face students, but this year that is exactly what she did at the tiny Nazarene Church of Forest Lake.

"I didn't know what to expect," Miller continued. "But the students were so great."

The church is the one-time residence of Wayne and Mary Bitsuie who have donated their old house-which sometimes doubles as the sheep herder's bunkhouse-for the use of church members.

The congregation is led by Pastor Vincent Nells and his wife, Erma, who is from the Big Mountain area just down the road. Despite its humble roots, the little church has heart.

That heart continues to attract visitors from other churches, including the New Hope Church of Beecher City, Ill.

"Leaders came from different states to serve out here; they came back and put out the word-there's an opportunity to serve God on reservations in Arizona," John Griffith said.

Griffith describes New Hope as non-denominational, though it was once Baptist. Griffith's son, Sean, visited Arizona last year and was insistent that he wanted to come back.

"Kids are bringing their parents with them," Griffith explained. "It has been a real blessing. I've enjoyed knowing the folks from Effingham, and the new people we've met out here."

Griffith said that he was impressed with the reception the group received.

"My son made friends in five minutes flat," Griffith laughed. "Patrick Ranger and his family have been very welcoming-we stay on their site.

Jerry and Deanna Wright are among the leaders who keep the annual visits coming.

"We have volunteered three years in Forest Lake; seven years in Pinon," Wright said. "We met the Ranger family while at the Southwest Indian School in Phoenix in 1985."

The Wrights were dorm parents, as well as teachers and administrators. They now reside in Effingham, Ill.

On the first day of Vacation Bible School at Forest Lake, 31 students crowd into the church. Teenagers Nathan and Isaiah, "the crazy dudes," entertain them with a little skit they call "Dr. Frankenstein."

The skit was comic relief between intense break-out sessions that spread out beyond the walls of the little church, beneath a shade arbor and various trees.

Another volunteer, Barbara, said that she wasn't supposed to be physically able to do painting and other chores.

"But I can cook and clean," Barbara said cheerfully. "I had a knee replaced, but then we climbed down Canyon de Chelly. Whatever ails me, God takes care of me."

Activist, filmmaker and musician Klee Benally and his family facilitated what he called "a creative bridge across the ocean," uniting youth from northern Arizona with others from Chemnitz, Germany.

"This is a 10-day cultural youth exchange between German and northern Arizona youth," Benally said. "The spirit and purpose of the youth exchange project is to connect young people with different cultural backgrounds to find similarities, to learn to respect differences, to complement and help each other and to be creative."

Thomas Schoen-Schroeder explained that Chemnitz is near the border of the Chzek Republic.

"We hope to have an exchange; to have an inside into the culture of the Navajo and Hopi tribes," Schoen-Schroeder said. "We want to learn more about the arts, language and culture."

As part of the group Alternatives Jugend Zentrum (Alternative Youth Center), Schoen-Schroeder is part of a movement of actors, artists, filmmakers and musicians.

"When we arrived, we viewed a parade," he said. "In Germany, there is no expression of patriotism.

"A lot of people don't feel represented, but we don't get angry," said Sebastian Horn.

Arlett Auerbach was struck by the number of churches in America.

"Some of the churches [you have here] are forbidden in Germany," Auerbach said. "There are Jewish, Muslim-all religions. There are people who don't believe in churches; pagan people finding their own roots."

When asked what had impressed them from their experiences with Native people during their visit, Auerbach, Schoen-Schroeder, Horn and Nora Drewes discussed that individuals should be responsible for their own actions, connection to planet, individuals and the plants.

Horn said that it was important to note that he and his 18 companions had been raised under a dictatorship.

This experience, he explained, shaped him and his companions far differently than American youth.