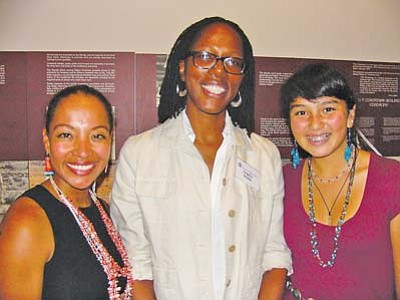 FLAGSTAFF, Ariz. - Often the mention of a museum brings to mind collections of the past. Nothing can be further from that image than the 61st Annual Navajo Festival of Arts and Culture presented by the Museum of Northern Arizona, which offered a lively picture of a vibrant, living people.

Collectors saw exemplary examples of Navajo jewelry, folk art, pottery, fine art, sculpture, textile and baskets, and performances. The rooms and hallways were packed on Aug. 7, despite the day-long rain.

This year, two outstanding films were presented, both honoring Navajo women-"In the Footsteps of Yellow Woman," and "Hearing Radmilla."

"In the Footsteps of Yellow Woman" was written and directed by 14-year-old Camille Manybeads Tso as an eighth grade project when she was just 13.

The 27-minute docu-drama chronicles the courageous journey of Tso's great-great-great grandmother during the Long Walk. Tso recounted how she learned about her warrior ancestor, and how her imagination was kindled.

"As I was growing up, I often visited my grandmother, Mae Wilson Tso," Tso said. "We were out on a walk one day, and she was talking to me, and suddenly she stopped and pointed to the ground. She said, "This is the place where your great-great-great grandmother Yellow Woman was shot."

Needless to say, Tso was fascinated by the story, and spent an entire year doing research for her film, which has been screened at over 25 film festivals across the country.

When asked how she cast the film, Tso laughed.

"I said, 'Hey, family, who wants to be in a film?'" Tso replied. "So, different family members stepped up to help. [My cousin] Ian had never touched a camera in his life. I just handed it to him and told him to point it."

Other relatives, including her father, Francis Tso, helped portray the story of Yellow Woman, who was said to have attacked and killed several members of the cavalry with her knife. Her husband, Yellow Man and other family members were hidden and cared for near Hotevilla, but Yellow Woman was shot in the stomach and captured-forced to make the long journey to the New Mexico/Texas border, and later returned to find her family waiting for her.

Tso was homeschooled by her mother, Rachel Tso for the past two years. She was also mentored by her uncle, Klee Benally who directs Outta Your Backpack, who co-produced the film with Tso's own company, Halne'e Productions. Tso's film has garnered screening in over 25 film festivals, winning numerous awards-such as Best Youth Film of the Year from the Cowichan Aboriginal Film Festival, Best Documentary Short from the Red Nation Film Festival and Most Innovative Short from the Eckerd Film Festival. It also won her entrance to the prestigious Idyllwild Arts Academy, the top school in moving picture studies for high school students in the country-along with an impressive scholarship.

The second film, by filmmaker Angela Webb, features the life of another of Tso's mentor/relatives, Radmilla Cody. "Hearing Radmilla" chronicles the rise and temporary fall of one of the Navajo Nation's most charismatic personalities.

According to Cody, Webb followed her for 11 years, and captured compelling and often tearful moments of the rise of a bi-racial child, often teased and ridiculed, through Cody's triumphant crowning as the 46th Miss Navajo Nation in 1997, and her descent at the hands of domestic violence.

"Every nine seconds, a woman is battered," Cody told her audience. "We talk about change, but we must be the change we want to see."

Webb, who was there with Cody, interviewed other former Miss Navajo Nation title holders, including the first, Ida Organick and Marilyn Help-Hood, as well as journalist Marley Shebala, members of her family and Cody's grandmother, Dorothy Cody, who raised a very special child.

The racism that Radmilla Cody experienced from the time she was small could not have been more poignantly represented by the on-screen frankness of an uncle, who unabashedly referred to Cody as "Chocolate Mama."

After the private screening of the film for the family, Cody said that her uncle tearfully asked for forgiveness for his behavior through periods of her life. "You had it long ago," Cody told him. Cody credited and honored her uncle for his honesty and frankness, and thanked him for his role in the film, which she called very important.

Webb's film skillfully portrays the courage of a young woman who overcame insurmountable odds to rise and achieve her dream of being one of the most powerful representatives of the Navajo Nation-and who survived domestic violence with its external and more importantly, internal scars. The film chronicles the descent that led Cody into illegal acts carried out to avoid violence, her indictment and conviction for failure to report criminal activities and subsequent stay in a federal prison, and how even this experience made Cody an even stronger Navajo woman.

Since her release from prison, Cody has resumed a proud life of service to her Navajo people-and to abused women throughout the world.

"I am on a mission to change the term, zhinni," Cody told her audience.

Although the Navajo word means "black," and is used to describe Black individuals, Cody said that it has been frequently used as a racial slur.

"I wanted to come up with a better name to empower our children of Black and Navajo ancestry," Cody continued, saying that a medicine man suggested nahila (sic). "It is a powerful word when used in ceremony with reverence."

Webb thanked Cody for her honesty and bravery.

"I don't think the film would be what it is without it," Webb said.

In response to a question from the audience basically asking if she planned to continue shadowing Cody, Webb was quick to smile.

"I have no plans to continue filming," she said, and smiled fondly at Cody who has become her friend.