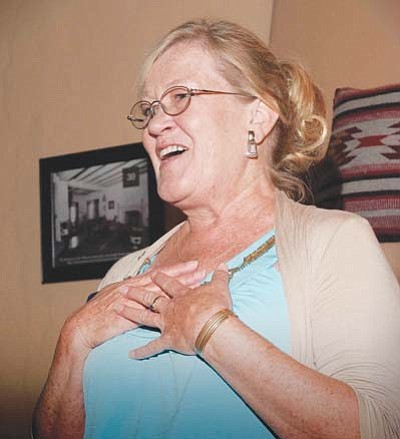 <i>Todd Roth/NHO</i><br> Alison Kolomitz, Justice of The Peace for Navajo County, Winslow, introduces herself at the Little Colorado River Democrats “meet and greet” event on Aug. 7.

A informal meet and greet was held in the historic La Posada Hotel Ballroom on Saturday, Aug. 7. to honor and introduce local, county and state wide Democrats. Snacks and refreshments were provided by the La Posada hotel. Registration to support candidates was available and short talks by candidates and current public officials was held after 6:30 p.m.

The following is a listing of event attendees:

• Ken and Barb Smith, with others, are the founding parents of the Navajo County's two clubs. The White Mountain Democrats and The Little Colorado River Democrats.