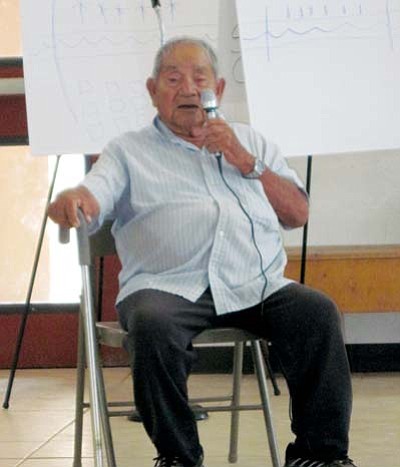 <i>Rosanda Suetopka Thayer/NHO</i><br> Neil Monongya, an elder from Hotevilla Village shares his knowledge of water, the sacredness of the earth and reservation lands with the crowd at the COALition Forum.

HOTEVILLA, Ariz. - The Inter-Tribal COALition held a one day forum at Hotevilla Youth and Elderly Center on Aug. 6 to educate, inform and share ideas and concerns regarding the recent passage of a Carbon Capture Sequestration (CCS) Project by the Hopi Council on July 19 and to get updated information on the approval of the artificial snowmaking venture for Arizona Snowbowl.

The Hopi Council voted to endorse the experimental CCS project without full input from either Hopi tribal members and without concurrence from the Navajo Nation. The move was spearheaded by Kykotsmovi council representative Nada Talayumptewa of the Hopi Water and Energy Team.

Talayumptewa placed the action item and resolution on the council agenda without public notification to Hopi tribal members and their respective villages, which is required for all council agenda items.

The project provides for test drilling on the Black Mesa Basin on Hopi lands, near the Navajo communities of both Cow Springs and Tonalea, to study the geologic conditions to determine the suitability for storing carbon dioxide (CO2) emissions from nearby coal-fired plants situated on the Colorado Plateau. The project is proposed by the West Coast Regional Carbon Sequestration Partnership (WESTCARB).

If conditions are found to be favorable, the project, funded by the U.S. Department of Energy, would provide permanent storage of CO2 emissions from as many as six regional power plants on tribal lands.

The second item on the forum agenda was the recent approval by the Flagstaff Water Commission to allow Eric Borowsky, owner of the Arizona SnowBowl to move forward with plans for artificial snowmaking on the San Francisco Peaks, which is sacred to Hopis, Navajos and six other Arizona tribes.

This approval may potentially allow Snowbowl to use either potable or reclaimed water for the artificial snow-making project, despite numerous objections from Hopi, Navajo and local Flagstaff non-Native community members given through personal testimony at last week's public water hearing.

Agriculture Secretary Tom Vilsack gave his approval on July 1 to allow Snowbowl to proceed with expansion of the ski resort as well as the go-ahead to start infrastructure construction for the artificial snow-making equipment.

Talayumptewa, along with council members Phillip Quochytewa and Arvin Puhuyesva, who are also members of the Water and Energy Team, supported and endorsed Borowsky's plan to use groundwater for artificial snow in a letter dated May 7. But after much public tribal controversy and documented protest, both Hopi and Navajo Nation councils passed formal tribal resolutions objecting to any form of snowmaking.

The forum was structured for attendees to share in meaningful dialogue over possible new strategies for stopping these projects and also to share factual information about each project. Presentations were given by Vernon Masayesva, Executive Director of Black Mesa Trust; Roger Clark of Grand Canyon Trust; Hertha Woody, graduate intern for Sierra Club; Howard Shanker, attorney for Save the Peaks; Ben Nuvamsa, CEO of Kiva Institute; and Ed Becenti, tribal resource advocate from St. Michaels.

Some of the most compelling historical background was given by two Hopi elders, Neil Monongya-Greasewood Clan/Hotevilla Village and Wilton Kooyahoema-Kokopyum clan/Hotevilla Village. Added support came from Vernon Masayesva's elderly father, Victor Masayesva Sr., who is in his mid 90s and has been a lifelong Hopi farmer and sheepherder.

Masayesva told the crowd, he had to come to the meeting staying the entire day, saying he thought the COALition forum was "extremely important."

Woody, a member of the Navajo Nation, gave an extensive presentation on the current status of the Snowbowl expansion project and statistical information on economic factors that showed flaws in public information that Borowsky and Murray gave at the public water hearing last week.

After each presentation, the presenters took the time to answer questions, and pass out written information.

Shanker came to share the legal options that Hopis and Navajos could take to help stop both of these projects, including filing additional tribal lawsuits, citing Borowsky's public comment last week that, "all these tribal lawsuits have really held me up on the snowmaking and that if this keeps up, I will run out of money to fund my ski resort expansion."

For more information about upcoming COALition meetings and an upcoming conference in October on Black Mesa, contact Ben Nuvamsa or Tulley Haswood at (928) 380-6677.