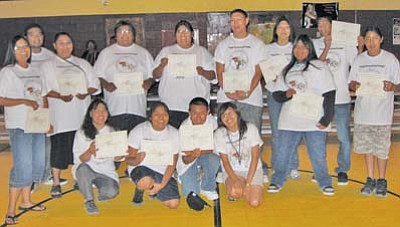 Many of the students came into the program as non-speakers but left being able to speak short sentences as well as learning about Hopi culture. The approach to the teaching is referred to as language immersion, meaning that only Hopi is spoken to the students during classes to enable them to get accustomed to hearing the language.

The model was a mentor-apprentice approach where a lead teacher would train the apprentice or kyee kelt to teach Hopi. For the first part of the class, the mentor taught the classes and during the final week the kyee kelt took over.

The Hopi Lavayi Institute has been training teachers each summer for the last seven years. This year, they included non-teachers and semi-fluent speakers in the program. Many attendees have attended for all seven years to get the certification. Many participants teach Hopi language at their schools on the Hopi reservation and come yearly to participate.

There are many challenges with developing a Hopi language program on the reservation. Dr. Nicholas states that the Institute is a training institute and only recently has branched out into community instruction. There is an initiative to transfer funding of the Institute to the Department of Education from the Cultural Preservation Office (CPO) to better manage the program and establish Hopi language programs in each school.

The content of the courses taught were different aspects of Hopi culture. In some classes, smaller children were taught how to recite stories in Hopi, such as a clown slipping on ice and spilling his firewood. During instruction, many visuals are used and role-playing is utilized to assist in the lesson. In one class, children were being taught about a clown or koyala pushing a wheelbarrow full of firewood with a dog. Students were able to recite the entire story in Hopi after conclusion of that particular lesson.

The young adult students learned things such as how to name a baby in the Hopi way. Normally women name the babies and the females were able to recite the verbiage used when naming a baby traditionally. In another class, students were taught Hopi table manners and how to invite guests to eat or ask for certain items at the table. Another class taught the vocabulary of the fields or pasa' such as shovels, hoes and planting stick as well as the pasa' activities performed during the certain moons or muyat' of the year. Students were able to recite all the moon phases in Hopi.

Leigh Kuwansisiwma, CPO Director stated that based on a survey done in 1999, the Hopi language was "under a tremendous amount of stress" and that there was a need to revitalize the program. He added, "The tribe should invest in Hopi Lavayi."

In the past some elders couldn't speak English. Now English is the primary language. In any culture, it takes only two generations to lose the language and Hopi language is in danger of being lost.

Hopi Chairman LoRoy Shingoitewa stated that he would like to see Hopi language grow and be strong. He also commented that before it was up to parents and grandparents to teach children how to speak Hopi, but they are not teaching it anymore. He would like to see the Hopi Lavayi program functioning more effectively per the wishes of the people and have a more permanent program. He encourages parents and grandparents to speak Hopi to the children. Many former leaders like Emory Secakuaptewa and Farrell Secacaku wanted to make sure Hopi lavayi stays alive. He feels that if Hopi culture and values are traded to English there is no longer any value. He thanks the Hopi Lavayi Institute for their hard work.

Former Chairman Ben Nuvamsa stated that Hopi has "an intrinsic value in how we express ourselves" and that a pragmatic approach should be taken to in saving the Hopi language.

Donald Wadsworth Dawahongnewa, Hopi Lavayi Outreach Coordinator for the CPO stated that it was prophesized that we Hopis would lose their language, and that prophecy is seemingly coming true as many youths do not speak Hopi. Elders used to say do not forget your language or there will be consequences. Dawahongnewa taught his daughter when she was about eight years old when she didn't know a word of Hopi. Now she is fluent, so he encourages parents and relatives to teach the children how to speak Hopi.