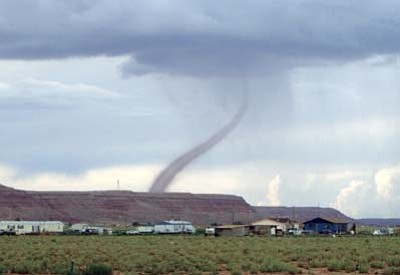 <i>Photo by Dwayne Clauschee</i><br> This funnel cloud was seen north of the mesas near Chinle on Wednesday.

WINDOW ROCK, Ariz. - The Navajo Commission on Emergency Management declared a state of emergency on the Navajo Nation on Wednesday due to flooding and related problems from recent heavy rainfall.

While the rainfall is welcomed during this drought period, excessive precipitation has led to a number of rural roads being washed out in several communities. A bridge in Church Rock, N.M. has been washed out twice since Saturday. Residents have been evacuated due to flooding along the Little Colorado River and there are roads where the culverts have been exposed or washed out.

According to a press release, crews in the Chinle area were out all day Wednesday taking assessments of washes, arroyos, road conditions and water levels. At an evening news briefing, a Navajo Nation Safety of Dams official reiterated that the Tsaile Dam is intact despite unofficial reports stating otherwise. Tsaile/Wheatfields Chapter did confirm that a small dam north of the chapter had failed.

Water levels at Tsaile Dam will continue to be siphoned and monitored throughout the weekend. Residents were advised that drainage of Tsaile Dam would result in an increase in water runoff through Chinle Wash. Officials advise that the public stay clear of any washes, arroyos or flooded areas. Vehicle operators and pedestrians are urged not to cross any flooded roads or pathways.

Rainfall is expected to continue throughout the week and road conditions will continue to be a matter of concern. One reported road closure due to flooding was reported between milepost 14 and 15 near Rough Rock.

There have also been funnel cloud sightings near Standing Rock, N.M. as well as near Many Farms and Chinle. There were no reports of structural damages, but as a precaution, the communities of Red Valley and Cove were evacuated Wednesday night.

There have been several fatalities as a result of the extreme weather. In Rock Point, an elderly woman died from injuries received as a result of a roof collapse of a traditional hogan. The hogan had a log and mud roof. Lightning has also claimed the lives of a 17-year-old female visiting relatives in Cameron and that of a man fixing a roof in Kayenta.

Officials stressed that the safety and health of residents are the main concern and that they will remain on alert and continue to monitor the conditions of the weather, roads, water levels and dams.

Officials ask that the public keep in touch with family members and to remind one another to avoid floodwaters.