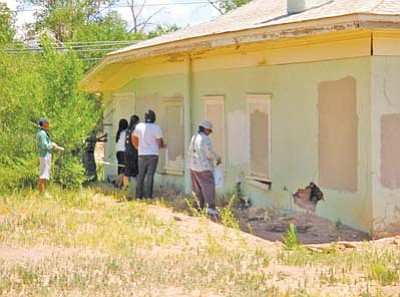 <i>Courtesy photo</i><br> A crew of volunteers successfully covers up graffiti on a building.

TUBA CITY and MOENKOPI, Ariz. - The Western Navajo-Hopi Meth Task Force recently launched its summer program to attack graffiti in Navajo and Hopi communities throughout the western district. On July 9, the Task Force, which included a number of local families and members of the Tuba City Boys and Girls Club, hit numerous graffiti locations in Tuba City and did the same thing in Moenkopi Village on July 10.

"Graffiti is vandalism, pure and simple," said David Rozema, Coconino County Attorney and one founding member of the Task Force.

"But more than that, it damages the heart and spirit of the community. By painting over the graffiti, we send an uplifting message to citizens that we all care about each other and where we live," Rozema continued.

Approximately 15 youth joined a dozen Task Force members for the two days in Tuba City and Moenkopi. They worked hard alongside the adults for two full days, starting at daybreak and working until nearly 5 p.m. each day.

"The kids were awesome," Rozema said. "They accomplished a lot and also seemed to get an emotional boost by contributing to their community in this way. We could tell that this experience was an encouragement to them."

The group painted over graffiti at many different locations, including vacant warehouses and buildings, fences, utility boxes and similar structures, old BIA homes, the ceremony gathering place in Moenkopi, and at least one private residence.

The graffiti was varied and included "tagger" graffiti and other graffiti with gang affiliations.

"We want to express our appreciation to the Flagstaff Metro Board for donating equipment to us, including a generator and paint sprayer. This equipment allows us to cover-up a lot of graffiti in a short period of time. We can really cover a lot of ground. Also, we want to thank Tuba City Police Department and Moenkopi Law Enforcement Committee for providing drinks and food," Rozema stated.

"We know that the graffiti will eventually return to some of these locations," Rozema continued. "We hope that some local citizens in these communities will volunteer to serve as local liaisons by painting over the new graffiti as soon as possible. We will provide all the necessary supplies for this important follow-up work. The sooner new graffiti is removed, the more likely it is that it will not return to that location again."

The Task Force will continue its graffiti removal efforts for at least the next couple months, focusing next in the communities near Bodaway/Gap, Kaibeto and Leupp. Anyone who would like to work with the Task Force or serve as a local liaison in their community is encouraged to contact the Coconino County Attorney's Office at (928) 679-8229, e-mail Tami Suchowiejko at tsuchowiejko@coconino.az.gov or visit www.coconino.az.gov/CountyAttorney.