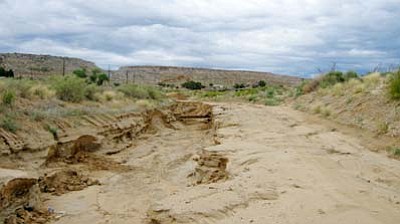 <i>Tyler Tawahongva/NHO</i><br> Severe flooding in recent days has caused extensive damage to sewer and water systems as well as roads in the Polacca area. Hopi Tribal Chairman LeRoy Shingoitewa and the Navajo County Board of Supervisors issued a state of emergency for the area last week as scattered thunderstorms are expected to continue this week.

POLACCA, Ariz. - The western portion of the Hopi Reservation was under a state of emergency as declared by the Hopi Tribe and the Navajo County Board of Supervisors after torrential rains closed roads and damaged water and sewer lines.

The Navajo County Board of Supervisors did the same during a special meeting July 28.

In the declaration, Shingoitewa stated that "heavy rainstorms [have] caused a majority of local roadways to be damaged and impassable; water and sewer lines are damaged; telephone lines are down and inoperable; several homes are flooded and have sustained infrastructure damages and such natural damages have severely impacted the daily lives of the residents of Polacca, and First Mesa Consolidated Villages of Walpi, Tewa, and Sichomovi."

With the declaration, the chairman activated the Hopi Emergency Response Team (HERT) and directed all tribal departments and programs to assist with whatever needs are identified, including but not limited to condition assessments, plans of action, mobilization and identification of resources (human, equipment and financial), and delivery of services in coordination with other agencies.

Both water and sewer systems were damaged for a majority of residents in the Polacca area. It was estimated that full services may take up to two months to be restored.

Residents reported items such as trash, chairs and pretty much anything that wasn't secured wash down into their yards from the higher elevations. Roads were closed because sand had washed over the highway making it impassable. There were reports of traffic in each directions and ADOT crews worked throughout the night to clear the road to allow traffic to go through.

The main road up to the villages was closed on Friday evening due to rock slides on the road according to Navajo County Sheriff Casey Clark. A command center was set up near the post office where cleanup activities were coordinated.

Residents without clean water in parts of Polacca were urged to boil their water before drinking. Infants, elderly and people with people with illnesses were urged to drink only bottled water. Several portable toilets were brought in for residents to use and drinking water will be made available at various water stations where people could bring their containers to fill up with fresh water.

Many gullies carved out by flash flooding could be seen in some areas and drainage ditches were filled with mud. Crews were working to clean them out in anticipation of more rainfall.

With more rainstorms anticipated in the coming days, Incident Command is urging individuals to avoid traveling on non-paved dirt roads as the chance of getting vehicles stuck in muddy terrain is high, even when operating vehicles equipped with four wheel drive. Many of these roads have sustained major erosion and damage due to water flooding. Assistance will be very limited as Incident Command has work crews assigned to the emergency team prioritized with emphasis being on emergency related tasks within the villages.

According to emergency warning on KUYI radio residents could be without water and sewage service for up to two weeks in some areas of Polacca.