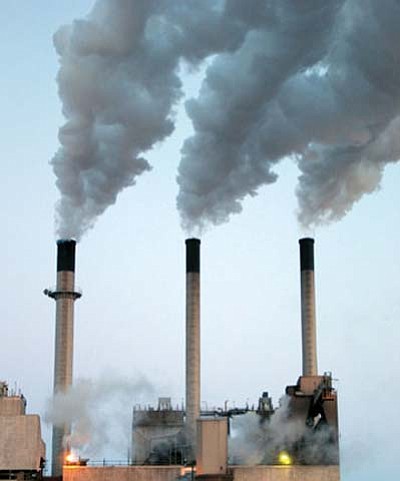 I guess the saying is true. Actions do speak louder than words. Or at least in the case of the Hopi Tribe, it is. Following the Hopi Tribal Council's recent approval of a controversial project that gives the go-ahead to explore and evaluate geologic characteristics of the Black Mesa Basin for potential underground storage of carbon dioxide (CO2) in an experimental method known as carbon capture sequestration (CCS), it would be simply ludicrous to assume that the Hopi Sinom - or the Navajo Nation, for that matter - would quietly acquiesce to such a deal.

So this week, Hopi and Navajo tribal members alike are encouraged to join a march in solidarity against this project, which coincidentally, was not approved by tribal members. The march began in Tuba City yesterday and will end in Hotevilla at 10 a.m. on Friday morning, concluding with a meeting hosted by the Inter-tribal COALition at the Hotevilla Elderly and Youth Center.

Late last year, a representative from Diné Power Authority (DPA) claimed that local and national environmental groups had created and cultivated "climate change hysteria" with their opposition to the proposed Desert Rock Power Plant in northern New Mexico. This came after the Hopi Tribe had banned environmental groups from their lands due to their assertion that they deprived the Hopi people of millions of dollars in lost coal revenues that they claimed, in part, were needed to sustain and safeguard Hopi culture and tradition.

While dismissing the reality of global warming, the same DPA representative contended that "coal is a major future source of electricity generation" and that "the next generation of advanced technologies" would be crucial in resolving the issue of carbon dioxide and other harmful emissions generated by coal-fired power plants.

With that, the novel concept of Carbon Capture Sequestration (CCS) was introduced as "the best technology to control emissions." It was methodically explained that "two 750 MW Ultra Supercritical boiler units, along with a selective catalytic reduction (SCR) system, fluidized gas desulfurization (FGD) units, wet scrubbers and wet stakes for mercury control" will be utilized to capture power plant emissions. In layman's terms, you simply take the carbon dioxide out of the air and store it underground. What's so hard to understand about that? If you stop and think about this for just a minute, a human can't "control" emissions any more than they can control the sun coming up every morning, meaning that despite the best technology available, it's simply not that easy.

Even with the latest in "new" technology and engineering marvels, the issue of carbon dioxide emissions being potentially "scrubbed" from the atmosphere and stored underground using CCS seems like a pretty far-fetched "scheme" at best, akin to a snake oil salesman selling dubious "cure-all" remedies, but it would appear that the Hopi Tribal Council has been sold into this scheme and now there's no backing out.

It's no secret that carbon dioxide - in sufficiently large quantities - can be harmful and potentially deadly. One can easily look up "Lake Nyos, Cameroon" on the Internet to read up on how naturally-occurring carbon dioxide emissions can be deadly to humans and animals. But in looking at the proverbial bigger picture, one could easily surmise that the only real way we can "control" deadly carbon dioxide emissions from being released into our atmosphere is quite possibly as simple as preventing these emissions from occurring in the first place, rather than trying to sell us on the whole "smoke and mirrors" concept of CCS.

The fact of the matter is that there are many Hopis and Navajos that are seeing through the smokescreen and realize that the sooner we gain independence from fossil fuel technologies and focus more on green energy initiatives, the sooner our world will come back into balance.