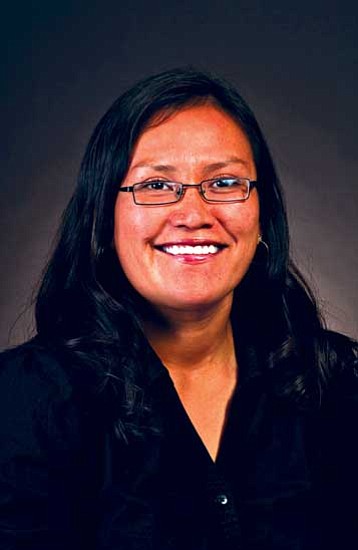 <i>Courtesy photo</i><br> LaDawn Yazzie, a junior in food service management in the College of Nursing and Health Innovation at Arizona State University, was recently awarded a $5,000 Morris K. Udall Scholarship to help achieve her goal of teaching nutrition awareness and healthy eating habits across Indian Country, including the Navajo Nation.

TEMPE, Ariz. - Putting together a meal for her five brothers and sisters on weekends meant getting downright creative for LaDawn Yazzie. Fending for herself and her siblings in an isolated community on the Navajo Nation became a challenge worthy of "Throwdown With Bobby Flay," minus the fancy ingredients.

Yazzie tried making corn dogs with what she had available, for instance, and ended up with hot dogs wrapped in tortilla dough and baked, a tasty compromise. Experiments making ice cream weren't so successful.

Her love of cooking and her resourcefulness made her determined to bring good nutrition to tribal communities. Having worked as a restaurant pantry cook and later studying to be a chef, her path brought her to ASU, where she has won a prestigious Morris K. Udall Scholarship to help advance the lives of other Native Americans.

She is among only 80 students to win $5,000 Udall Scholarships, awarded to sophomores and juniors who plan careers in environmental public policy, tribal policy and health care. In the past 14 years, 25 ASU students have won Udalls.

Yazzie is a junior in food service management in the College of Nursing and Health Innovation. Her dream is to establish a teaching kitchen in reservation communities, teaching nutrition awareness and cooking to adults and healthy eating and exercise to children. She hopes to influence the health of Native Americans, modifying diets, decreasing diabetes and influencing tribal policy in food management.

A single mother of two children, Yazzie currently spends about 60 hours a month coordinating the food service components for fund raising for the 27th annual Navajo Nation Southwest Fair, coming up in September. She also works as a Native American cultural entertainer with her family.

Yazzie grew up in the tiny community of Dilkon, graduating from high school before going to work in the kitchens of the historic La Posada Hotel in Winslow. While there she learned that a Head Start program was having a hard time feeding 200 children with inadequate appliances, such as hand-held cheese graters. Putting her organizational skills to work, challenged by the lack of resources, she helped the program buy a commercial food processor.

She pursued her love of cooking by applying and being accepted to the culinary arts program at Scottsdale Community College. Inspired by the influence of food, and eager to learn more, she enrolled at ASU in 2008.

Her commitment to tribal health through nutrition was strengthened when she discovered during research for a paper that the traditional Native American diet was healthy, consisting of corn, beans, squash and melons. Fry bread became the only option when the tribe was driven from their homes and made to subsist on government rations of powdered milk, flour and lard.

"When I discovered that fact, I became even more determined to reintroduce my ancestors' delicious and healthy foods," says Yazzie, who thinks a teaching kitchen could serve as a model that might be replicated on other reservations.

"The largest tribe in America, the Navajo, is dependent on commodity rations that are being distributed as a survival resource. This type of food is adequate to sustain their lives, but not their health. The number of obese children on the reservation and the number of cases in the diabetes epidemic are continually on the rise. I have taken my life experiences and made it my mission to help those who are most in need, who do not have the skill or knowledge to improve their overall health," Yazzie stated.