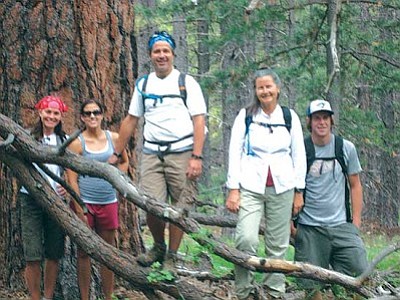 <i>Stan Bindell/NHO</i><br> Arizona Highways Editor Robert Stieve (center) likes to get out on trails such as this one on the San Francisco Peaks. But now he's working to save Arizona's state parks.

Several of the state's parks have closed and more are scheduled for closure due to state budget cuts. Editor Robert Stieve hopes this program will help keep the parks open.

Those buying into the program can designate which park they want their money to go toward. Those interested can log onto www.arizonahighways.com and go to the state parks link.

Stieve helped come up with the idea when he was in Flagstaff and thinking about how they could keep Riordan Mansion open.

"Then we thought 'Why can't we help all state parks?'" he said.

Those interested in keeping the parks open can also donate to the Arizona Parks Foundation. Stieve said one of the best parts about this program is that the state legislature can't sweep any funds from it.

The state legislature has swept millions of dollars from the state parks budget into the general fund to deal with the state budget deficit.

"People will know that every penny they donate will go toward the parks," he said. "This will be perpetual. We anticipate using this every year in the foreseeable future."

Even though Arizona Highways is a state publication, it receives no funding from the state. The Arizona legislature has also swept $2.5 million during the past two years from Arizona Highways to help address state budget cuts.

Stieve said stories and photographs about state parks is a significant part of Arizona Highways.

"So, this was a logical tie-in," he said. "Foot soldiers in the different towns are passionate about their parks. Riordan Mansion in Flagstaff is just one example. This is a win-win situation. It's good for Arizona Highways and the state parks."

Stieve said when parks close that the surrounding communities suffer the economic impact. He said the closure of Homolovi, for example, would hurt Winslow economically just as the closure of Lost Dutchman State Park would hurt Apache Junction.

"I hope this program spurs other programs to help the parks," he said.

"This isn't just a donation. People get a high quality magazine in return while helping the state parks."

Stieve estimated that Arizona Highways, which has been published for 85 years, brings $35-55 million into the state each year because when people read stories they often go to the places and spend money. For example, a recent issue focused on the best restaurants in the state. Many readers will visit those restaurants and those communities after reading about those cool places to eat.

"We've been blessed with great photographers and writers," he said.