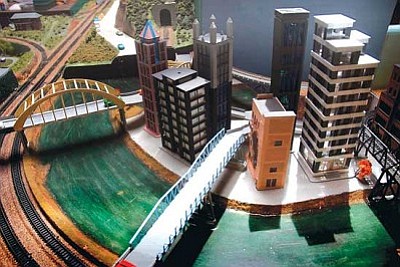 Aerial shot of downtown Winslow - NOT! (It's actually a model train scene) - Winslow Railroad Days occurred April 23-25. Model train clubs came to Winslow and set up displays at Snowdrift Art Space and the La Posada Train Depot. All the trains were running and some displays were as long as 50 feet. The Winslow Chamber of Commerce Visitors Center had vendors set up selling railroad and train memorabilia. This is a yearly event. Contact the Chamber of Commerce at (928) 289-2434 if you are interested in visiting next year.