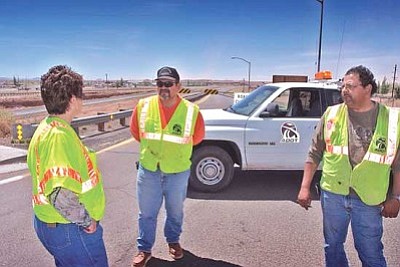 WINSLOW, Ariz. - The ADOT supervisor on scene has reported zero visibility conditions on Interstate 40. The dust area covers from milepost 230 to milepost 260, which is larger than the original coverage areas of four to eight miles. Conditions in this area are severe. Travel on I-40 is not recommended until the closures between Flagstaff and Winslow are lifted. Eastbound traffic coming out of Flagstaff has been stopping on the interstate instead of turning around and going back to Flagstaff. ADOT and DPS are working on correcting that problem. Because conditions have deteriorated substantially, the interstate will be not opened anytime soon. The Weather Service did predict that winds would increase when the pressure system started to move through this area around 6 p.m.

Interstate 40 was again closed at Hipkoe Road (exit 252) due to gusting wind and dust. The interstate was closed in both directions at 11 a.m. and will not be opened until later this evening. Wind gusts of up to 70 MPH are expected between the hours of 3-5 p.m.

The weather service is still predicting the highest winds by mid afternoon. Dusty conditions span for about eight miles along I-40. Some areas are worse than others, but conditions keeps changing with the wind direction. There are some areas in this section which will be relatively clear one minute and the next there is almost zero visibility. These changing conditions are very hazardous to motorists.

This year and last have experienced unusually strong wind and dust, in some cases causing fatal accidents. Typically the worst part of the interstate wind hazard is around the Leupp exit.

Being stuck in Winslow isn't all bad, however. There is always the La Posada Hotel and Restaurant to while away the hours enjoying art, food and historical ambiance.