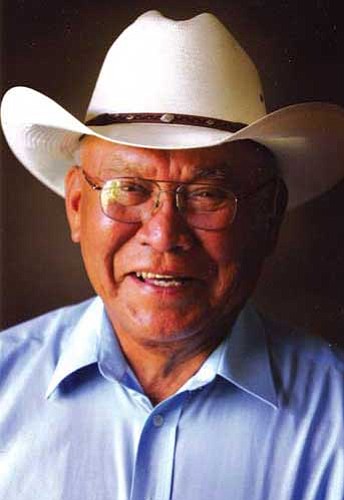 FLAGSTAFF, Ariz.- Family and friends of noted community elder, Franklin Kahn, joined to honor the life of a man who spent his life promoting education and Native culture among youth and people of all nationalities at several memorial dinners following his passing on April 6.

Kahn was born on May 25, 1934 to the Bit'ahnii Dinéé and Tsén'iikiní Yááshchíín nt'éé' clans. His parents were Jack and Alta Kahn He was raised in the communities of Pine Springs, Oak Springs and Klagetoh.

He was born into a family of noted silversmiths and rug weavers, including early Navajo silversmith Tom Burnsides and weaver Mabel Burnsides Meyer.

Kahn was a life-long student of religion. He experienced and practiced other faiths, but remained a strong believer in Navajo traditional ways.

Kahn joined the Bahai faith in the late 1950s. He was the first Native American to be elected to the National Spiritual Assembly of the Bahai, and served in this capacity for 12 years. This led him to travel to places such as Israel sharing the faith.

Kahn's art career began as a small child, when he and his brother Chester used to draw on the rocks around the Pine Springs grazing areas where they tended their mother's sheep. Kahn began earning money with his talent at school, where he drew greeting cards that he sold at school for 25 cents or $1. Kahn's formal education began in the boarding school at Shiprock, N.M. for four years. He continued his education at the Stewart Indian School in Carson City, Nev. from 1949 to 1953. Kahn then went on to study fine arts at the University of Nevada.

Kahn met his life partner, Mary, while at Stewart Indian School in 1949; they married in 1955.

Kahn had a lot of respect and honor for the men who entered into the military service. Kahn was enlisted in the Army at age 17 and placed on standby status. He was stationed in California from 1953 to 1957 and worked stateside in the Sierra Mountains.

Kahn produced a painting that featured his memories of his time in the Sierra. This painting took first place in an art contest in Nevada. The family still owns this painting.

With considerable experience in the fine arts under his belt, Kahn made the decision to move into commercial art.

His first job in this field was for the Boll Sign Company where he learned the art of electric neon sign making - a dying art. Kahn loved to share his experiences of the design and construction of the bright lights of some of the casinos in Las Vegas, including the Dunes and the Flamingo.

Kahn enjoyed success as a Flagstaff businessman as well. He went on to found the Kahn Sign Company where he employed his talents to create signs and billboards across northern Arizona and beyond. Kahn also headed a ranch with up to 150 head of cattle and horses. He also was part-owner of the Turquoise Hogan, headed by his wife. There, the couple promoted Native American jewelry and art for 30 years in downtown Flagstaff.

Kahn was a strong advocate for education, and he shared this belief with young people across the world.

He was a gentle, yet powerful, mentor to Native American young people as a member of the Council of Elders of the American Indian Science and Engineering Society (AISES) beginning in the late 1980s.

In his last years, Kahn added work at the STAR School (located outside of Flagstaff) to his service to Native American students where he enjoyed teaching Navajo culture and science.

Kahn is survived by a large and loving family, including daughters Eunice and Flora; sons Kevin and Larry; seven grandchildren: Clarissa, Lawrence, Austin, Jamake, Juniper, Angela and Cyril; and great-grandchildren, Leilani and Leticia, along with numerous nieces and nephews.

In his spare time Kahn loved watching rodeos, wrestling and golf. He was fond of food, and especially enjoyed Macy's coffee.

He enjoyed the company of people of all races and religions and believed in the oneness of mankind.

"Mentally, physically and spiritually, we are all connected together in a circle. It doesn't matter what race we are," Kahn expressed. "We all have a purpose, and we must learn to work together. There is much to learn. We need the elders from many places and many races to teach us."

Kahn's art has been exhibited at the University of Nebraska, the Laguna Gloria Art Museum in Austin, Texas, as well as the Museum of Northern Arizona. One of his paintings is featured in the book, "Southwest Indian Painting."

As a businessman, Kahn helped establish the Flagstaff Pow-wow, and the organization, Native Americans for Community Action (NACA).

Kahn was honored at his memorials by old friends and colleagues, including Everett F. Chavez, Al H. Qoyawayma, Shirley LaCarse, Tina Pino and Liz Encimas of AISES; and Dr. Mark and Kate Sorensen, Tom Tomas and Steve Babcock of the STAR School.