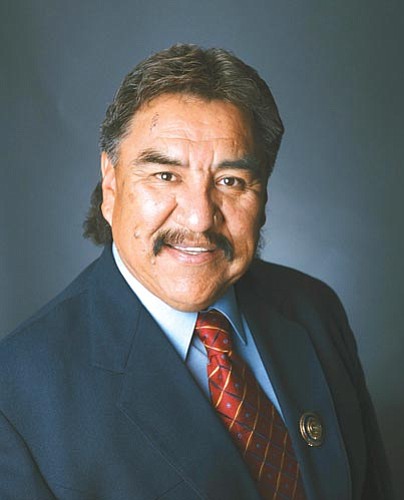 Written reports will also be submitted to the Council by its various standing committees, its boards and commissions, from the Chief Justice of the Navajo Nation, the regional director of the Bureau of Indian Affairs and from the area director of the Indian Health Services. The first day is reserved for reports to the Council, and action items begin on the second day.

One item in old business. Legislation No. 0751-09, sponsored by Roy Laughter (Chilchinbeto/Kayenta) will be addressed. This legislation seeks approval for amendments to the administrative agreement, scope of work, contract budget and term of Contract No. MOA043 between the Navajo Nation and the Health Management Associates Inc. for the purpose of providing third party administration services to the Navajo Nation Employee Benefits Program. If approved, the term will be extended for three years with a new ending date of December 31, 2014.

Additionally, there are 15 items in new business. Some highlights include Legislation No. 0769-09, sponsored by Leonard Teller (Lukachukai/Tsaile/Wheatfields). This legislation seeks approval for an extension of a Limited Waiver of Sovereign Immunity to allow the Navajo Nation to be sued in Federal District Court regarding compliance with the National Environmental Protection Act in carrying out HUD grants. The legislation, if approved, will authorize the Navajo Nation President the ability to execute Form 7015.15 for fiscal year 2009 through FY 2013.

Legislation No. 0016-10, sponsored by Orlanda Smith-Hodge (Cornfields/Greasewood Springs/Klagetoh/Wide Ruins), seeks the enactment of the Special Prosecutor Amendments Act of 2010. If approved, the Chief Legislative Counsel will be provided additional authority to apply for the appointment of a special prosecutor and to be otherwise involved in the operation of the special prosecutor in a manner similar to the Attorney General of the Navajo Nation. The appointment of judges to the Special Division of the Window Rock District Court will also require confirmation by the Navajo Nation Council if approved.

Legislation No. 0161-10, sponsored by LoRenzo C. Bates (Upper Fruitland), seeks amendments to Resolution CJA-04-10 to approve the terms and conditions of a Senior Unsecured General Obligation Tax-Exempt or Taxable Term Loan from Key Bank in the maximum principal amount of $60 million. If approved, the loan would be utilized for the design and construction of public safety and judicial complexes on the Navajo Nation.

Legislation No. 0758-09, sponsored by Hope MacDonald Lone Tree (Coalmine Canyon/Toh Nanees Dizi), seeks the enactment of the Navajo Nation Internet Sex Offenses Act of 2009. The purpose of the legislation is to ensure the safety of children while online and to protect children from sexual predators who anonymously prey upon them using the internet or other electronic means of communication with the intent to harm children. If approved, the law will close a gap where offenders may use intrastate means to carry out predatory communications and avoid prosecution. Convicted offenders will be subject to the Navajo Nation Sex Offender Registration and Notification Act as amended. Electronic communication device means computer, video recorder, digital camera, fax machine, telephone, wireless mobile telephone, pager, audio equipment or any other device that produces an electronically-generated image, message or signal.

A full copy of the agenda is available online at www.navajonationcouncil.org.