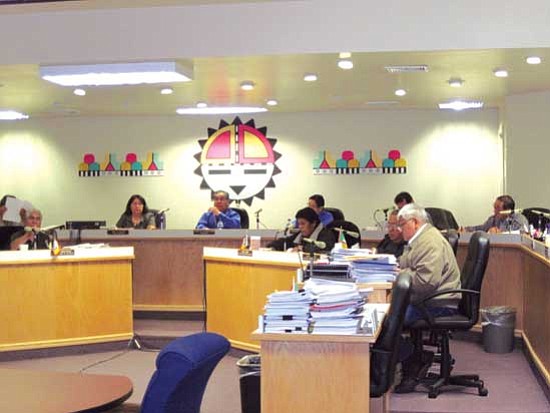 Hopi Chairman LeRoy Shingoitewa calls for Hopi rangers to remove the four non-elected representatives from the Hopi council chambers after they refused to step down on their own during a council meeting on April 6.

KYKOTSMOVI, Ariz. - The Hopi Tribal Council was unable to move forward with their scheduled agenda on April 6 as three of the First Mesa representatives, Dale Sinquah, Alvin Chaca and Leroy Lewis, and Mishongnovi Village Representative Leon Koruh, refused to excuse themselves from council chambers, after Chairman LeRoy Shingoitewa requested they step down that morning.

Shingoitewa stated that he could not "in all good conscience" call the formal council meeting to order with the aforementioned individuals seated on the council floor. Shingoitewa had previously instructed them to return to their respective villages to get formal endorsements in order to be allowed to serve as council representatives.

Shingoitewa responded, "All of you sitting right now in Tribal Council know the decision of the Hopi Appellate Court ... It's because of this final court decision that I cannot call this meeting to order until these individuals remove themselves. You can charge me with neglect of duty for not calling this meeting to order, but ultimately, I am responsible to our Hopi people. It's been hard for me [and] the Vice Chairman ... but this issue comes down to one thing. We work for the Hopi people; we represent the people; we took an oath and we are going to live by that oath ... It's time you face up to your own village people [and] face your own village issues. You are stalling our tribal government's progress."

Shingoitewa called for a recess until 9 a.m. April 29 and left the chambers. He returned later with his entire executive staff, leaving meeting attendees wondering what was going on.

Everett Calnimptewa from Upper Moencopi Village also went on record, speaking directly to the four individuals who wouldn't leave the chambers. "You are acting like children ... You don't realize what you are doing to our Hopi people," he stated. "You aren't listening ... You are not elected representatives and you are holding up progress. In this chamber, out of respect for the other elected council members, you individuals must come second. The Hopi people must come first. I am now asking you, on behalf of Moencopi Village, to please step down until your villages make a decision about your representation."

Shingoitewa directed Violet Sinquah, council sergeant-at-arms, to remove the four individuals. Sinquah approached the individuals, but each of them refused to honor her request.

Shingoitewa called for the Hopi rangers to assist, but they remained at the back of the council chambers and did not act. Shingoitewa did not repeat the request.

With a recess called until April 29, this gives ample time for the individuals in question to return to their villages and make a push for the necessary endorsements of their villages that will allow them to remain on council.

Last month, Shingoitewa had given eight of the non-elected representatives a deadline to return to their respective villages to resolve their representation issues with their village membership but to date, neither First Mesa nor Mishongnovi have had any type of public meeting with their council members.

Despite the Hopi Council's current status, if Shingoitewa holds fast to his ultimatum on removal if formal verification does not come from the villages regarding their elected representatives, the change in the Hopi Council's voting majority would change dramatically, resulting in a significant political shift for the Hopi people in tribal policy progress.