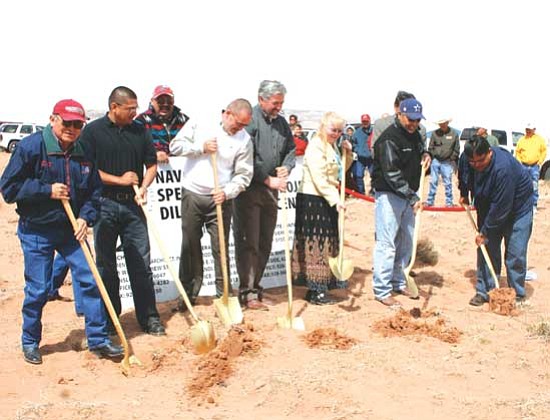 The Dilkon Wellness Center will be located just east of the present Judicial Court Building. The nearly 7,000 square-foot building will house offices for the staff of NNSDP along with exercise and weight rooms.

"Our traditional elders say that we should not just sit around, but be active and do something around the house," remarked guest speaker Anselm Roanhorse, Executive Director of the Navajo Nation Division of Health. "With modern-day technology with availability of electricity and running water, it is easy for people to sit around. We need to make good use of the wellness center and learn to be active on a daily basis."

Roanhorse said that he admires sheepherders because he thinks that they are the most physically active people around. He said that usually it's easy for them to herd sheep about three miles away from home. By the time they get back, they've gone six miles and if you times that for 30 days, that's 180 miles. If you consider that they do that for a whole year, they cover 2,100 miles.

"It's no wonder our grandparents were slim and healthy. You never heard of a sheepherder getting sick," Roanhorse said.

Thomas Walker, Council Delegate from Bird Springs and Chair of the Health and Social Services Committee of the Navajo Nation Council, was the other guest speaker.

Walker stressed the importance of living a healthy lifestyle and encouraged everyone to work together for the benefit of everyone in the community. He said that over 23,000 Navajos are living with diabetes and diabetes has affected all of the 564 Native American Tribes in the United States. He said when you look at these kinds of numbers; it makes you realize how hard it is to deal with diabetes.

Rudie L. John, Secretary-Treasurer for the local committee, gave background information about the project and the process the chapter had to go through to make the wellness center a reality after starting back in 2002.

Jesse Thompson, Navajo County Supervisor, gave the closing remarks and said that he has a positive outlook about diabetes thinking that someday there will a cure for the disease. He encouraged everyone to pursue living a healthy lifestyle and to make good use of the new facility.

Following the speeches, everyone went out to the construction site for turning over the dirt. The windy day and the blowing sand did not deter everyone as they witnessed the officials and construction personnel participate in the brief ceremony.

Felix Tsinijinnie, Dilkon Chapter President, gave some remarks and the benediction. The chapter provided lunch for everyone to conclude the day's activities.

The construction crew will be erecting a fence around the area for the first couple of days and then the tractors will come in to start moving the dirt, according to Comb. The modular building is 80 percent complete. When the foundation is ready, it will be hauled in from Phoenix.