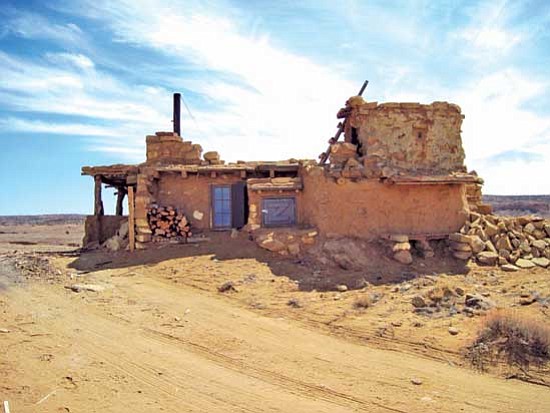 <i>Rosanda Suetopka Thayer/NHO</i><br> The Hopi "Earthship" stone studio house was built by Michael Kotutwa Johnson over the past five summers to alllow him to stay at his cornfield during planting season. The home is powered by solar, but water must be hauled in for daily use. Johnson plants over 23 varieties of organic Hopi crops each year.

KYKOTSMOVI, Ariz. - Michael Kotutwa Johnson, a University of Arizona (UA) doctoral candidate in Natural Resource and Environment, believes that Hopi is the ultimate example of sustainability and durability.

"The way we farm and how we hold our home communities together, most of our community members are still doing things the old way and I really encourage our younger Hopis to not lose those traditional aspects, to learn everything they can about Hopi farming, Hopi house building, everything they can about our soil and our moisture, because they don't and can't teach those things to you in a western science institution," said Johnson.

Johnson, 42, son of Caleb and Nancy Johnson, is one of three children who were raised off-reservation in Winslow. But their Hopi roots are in Kykotsmovi with his Hopi grandparents raised in Old Oraibi.

Johnson graduated from Winslow High School and attended Cornell University where they had an outstanding agricultural program run by Dr. David MacKenzie, who was doing extensive research on tomatoes. This sparked an immediate farming nerve.

Johnson already had a serious interest in farming. He was a constant companion to his late grandfather, Fred Johnson, at their family cornfield.

The interest is so genuine that over the past four summers, Johnson built a Hopi stone and solar powered "Hopi Earthship" studio at his cornfield so that he could live at his farming area during the planting season, keeping a watchful eye out for crows and other predators.

It's been since this experience at U of A, that he has had more time to focus on his own home community, including farming at his field where he has been planting and harvesting 23 different varieties of organic Hopi crops for the past 25 years.

Johnson does most of the field work himself, hauling water to use in his studio home, cooking on a Hopi traditional fireplace area. From time to time, his father joins him to help plant or weed, but he likes to utilize as many Hopi old traditions of doing things, which he says takes more time and labor, but that these Hopi methods are just effective today as they were for Hopi ancestors.

"I was lucky to be able to apprentice under a Hopi stonemason from Sipaulovi five summers ago. I had to haul and quarry the stone from about two miles away. It was pretty labor intensive, but I also knew that I wanted to learn how stone was harvested, shaped and cared for," he stated.

"There are so many important values to learn at Hopi. If our younger Hopis would take the time and effort to learn from their family members about these traditions, then we won't ever lose what makes us ... Hopi. I really encourage our students to talk with their uncles, aunts, grandparents about what they know. You can use your own Hopi traditional knowledge in your studies at a regular university. It helps with your discipline and appreciation for what we have here on the reservation. We're really lucky that so many of our elders still know quite a bit about the land and how to survive here and are willing to share that knowledge," he added.

Johnson has focused on Natural Resource management and American Indian Studies for his doctoral thesis, since there are so many ways of effectively managing Hopi natural resources.

"There are simple, sensitive ways to enhance and preserve our water, our land, our knowledge," he said. "I am interested in also opening the administrative gate for our younger Hopi members to have a voice at the national level of natural resource policy making. In the past years, we have always had non-Native consultants advising us on what is best for us, but its time for Hopis to start managing their own resources, making informed, educated, pro-active decisions about how our future generations will survive out here."

When asked what he would recommend that students study if they are interested in this field, he said, "I would take lots of science courses, also calculus and varied types of biology and soil sciences. You can even take these courses at a local community college, but it helps to get a solid, science foundation on what is possible in preserving Hopi lands and crops."

Johnson is being highly sought by outside environmental agencies to assist in natural resource development and tribal considerations as he nears his doctorate completion.

He currently sits on the board for the Indian Land Tenure Foundation that is based in Minneapolis, Minn. This board works directly with federal Indian policy and how those policies are applied through the United States.

"Even though I am getting nearer to completing my doctorate, I still want and need to come home to Hopi. You can do much in the area of education, but if you don't come home, you also start to lose your life and spiritual balance. I'm fortunate to have a place like this to come back to and remember what is really important," Johnson concluded.