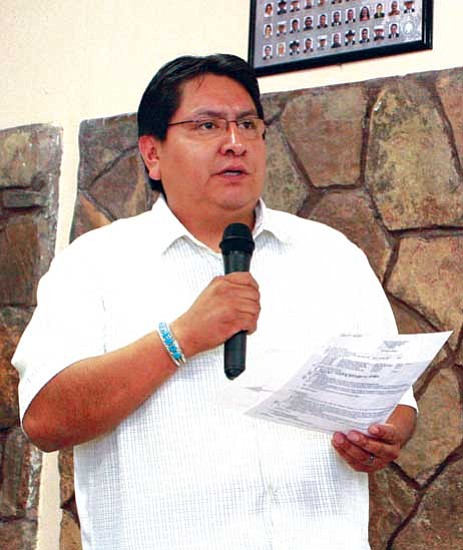 WINDOW ROCK, Ariz. - Shonto Chapter has led the way for local governance for 10 years, and on Sept. 20, they celebrated their 10th year of being the first Local Governance Certified chapter on the Navajo Nation.

Community members, chapter officials, county and tribal dignitaries gathered to applaud the community for being visionaries and for serving as a template for many of the 110 chapters across the Navajo Nation.

Accomplishing the local governance process was not easy.

On Sept. 22, 1999, the Transportation and Community Development Committee (TCDC) of the Navajo Nation Council certified the Shonto Chapter under the Local Governance Act with the approval of their Five Management System's policies and procedures pursuant to the LGA, 26 N.N.C. Section 102.

In 2005, the chapter exercised their authority as an LGA certified chapter to begin planning and conducting feasibility studies, which led to the approval of their Community-based Land Use Plan by the TCDC.

In 2006, Shonto Chapter voters approved their alternative form of government, which they now call the Council of Na'taa and Atsilasdai Executive - a council of nine members. This group, operating similar to a city council, held their first meeting in 2007.

In 2008, the Economic Development Committee of the Navajo Council unanimously approved their Business Site Leasing Administrative Management Plan, which delegates business-site leasing authority to the chapter.

With this, the chapter created two projects, the development of a commercial site called the Shonto Artist and Travel Plaza and a public facilities project known as the Shonto Community Public Service and Housing Complex. These developments have led to the community's movement to establish a government services complex, which is partially funded by two allocations totaling nearly $1.8 million from the Navajo Nation Council.

"A lot of the work went into building the foundation for the certification," Nez said. "We are starting a government from the ground up and it takes time, but we did it."

"I congratulate the Shonto Chapter for leading the way for other chapters across our Navajo Nation. As you know the LGA was passed by the Navajo Council more then 10 years ago and Shonto Chapter was the first chapter to get certified. We know first hand the challenges and obstacles the Shonto Chapter has gone through and we have seen the hard work of the local leadership, past chapter officials, the community members and Council Delegate Jonathan Nez. It took a team effort and today, we see their accomplishments - congratulations on your 10 years," he said.

Navajo Council Delegate Jonathan Nez, who also serves as a county supervisor for Navajo County, thanked the community and attendees for supporting the Shonto Chapter.

"Thank you for coming out here to celebrate a very special occasion for Shonto Chapter," he said. "Your dedication and commitment is exactly why the chapter is here today and why we can celebrate 10 years of being LGA certified."

The two executive officials are Council Delegate Nez and Laughter.