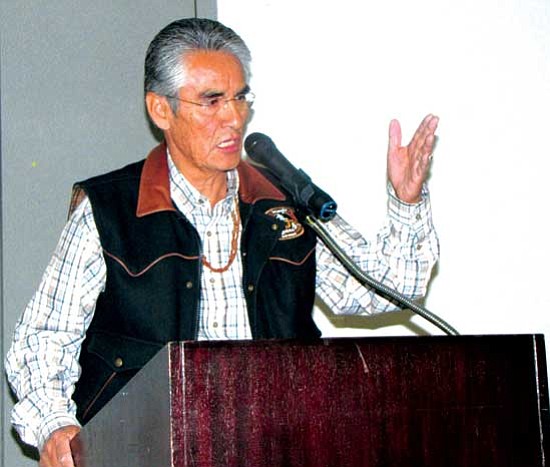 WINDOW ROCK, Ariz. - Public safety on the Navajo Nation is a top priority as the Navajo Council recently convened for a work session to entertain the idea of possibly applying for a $60 million loan from Key Bank to construct judicial and public safety facilities across the Navajo Nation. The talk of a loan comes only days after it was announced that $74 million would be received from federal Recovery Act funds to construct detention facilities in Tuba City, Kayenta, and Ramah, N.M.

"It's a major accomplishment to at last receive this jail funding so we have a place to put perpetrators. Our law enforcement officers will finally see offenders they catch stay in jail."

The centers will provide space for a range of culturally-appropriate services to inmates from pre-trial services, alternatives to incarceration, and services while individuals are serving time in jail.

Cowboy said the facilities will fulfill most of President Shirley's original 2004 Navajo Nation Judicial-Public Safety Facilities Development Program master plan for the replacement of deteriorating jails on the Navajo Nation.

That plan, first envisioned in his $500 million bond proposal, was to design and construct detention, courts and police facilities that would provide for a "one-stop shop" for justice professionals.

The original plan called for five large, three medium-sized, and four small facilities that would each include Peacemaking Courts, three judicial courts, a total of 96 detention beds and police offices. It would have also included one correctional rehabilitation center with 388 beds.

The bond proposal did not move forward because of the Navajo Nation Council's concerns at the time about paying off the bond even though interest rates were very affordable and the plan would have stimulated jobs and the economy across the Navajo Nation.

Constructing the justice centers with Recovery Act funds will address the breakdown in the Navajo pubic safety system attributed to the lack of jail beds, Cowboy said.

The centers will provide a deterrent to crime instead of the current revolving door, removing dangerous criminals from Navajo communities.

"It is great that we got this but more work needs to be done to ensure other areas get funding," Cowboy said.

Although the Navajo Nation is elated about the funding, a big void is still left in constructing other needed facilities across the reservation.

Key Bank presented details about the possible $60 million loan to construct judicial and public safety facilities. The loan is described as an unsecured general obligation loan of the Navajo Nation and the terms would be governed by the laws of the Navajo Nation, which will allow any dispute to be adjudicated within the Nation's court system.

Greyeyes spoke in favor of the loan to build jails and explained the loan will be used in conjunction with the expected stimulus funding. She presented the Council with a master plan detailing the break down of 13 projects that included facilities for peacemaking, courts, detention and rehabilitation centers to be funded.

The centers will provide space for a range of culturally-appropriate services to inmates from pre-trial services, alternatives to incarceration, and services while individuals are serving time in jail.

"Police officers are frustrated with the lack of jails across the Navajo Nation," Greyeyes said. "They don't want to waste their time chasing criminals, just to find out the criminals are being set free because of limited jail space."

Currently, there are only 59 jail beds for the entire Nation. As a result, many inmates serve only a portion of their sentence before being released.

LoRenzo C. Bates, chairman of the Budget and Finance Committee, was the sponsor of the legislation proposing the loan. He advocated for the loan and he explained the current financial market is far better than a few years ago.

"Back then, the market conditions were different from now," Bates said. "[T]his loan -at this point - is something we should consider as we move forward."

On hand to explain further details of the loan was Navajo Controller Mark Grant.

"Key Bank is taking a step of faith with the Navajo Nation and they have agreed with our court system," Grant said. "The loan will be the first of its kind in Indian Country. No other tribal government has been able to issue debt where dispute resolution is based on tribal law and where any dispute is adjudicated exclusively in the tribal court system."

It was explained that most banks do not provide unsecured loans to the Navajo Nation, due to sovereign immunity.

"A loan of this magnitude has never been seen by a bank to step up and go through with it," said Doug Goe, a partner with Orrick Herrington, in regards to the Navajo Nation's goodwill. "If there is any dispute, we are willing to deal with the law of the Navajo Nation, and I see this as a very fortunate loan that the Nation can pursue."