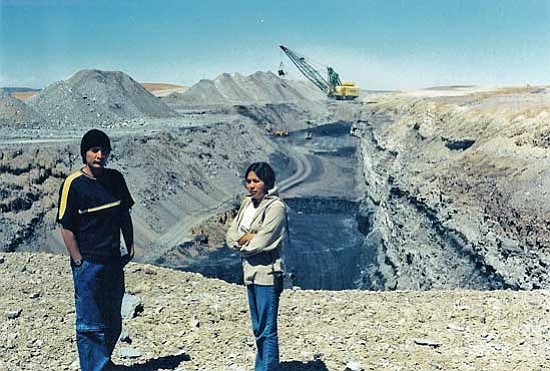 <i>Black Mesa Water Coalition photo</i><br> Roberto Nutlouis (left) and Lillian Hill at the Black Mesa Mine coal mine before it was closed.

KYKOTSMOVI, Ariz. - The Hopi Tribe has a message for the Sierra Club and other environmental groups: Keep out!

That is the response of the Hopi Tribal Council on Monday to what it says has been continuous concerted attacks from local and national environmental groups "bent on advancing their interests and agenda at the expense of the Hopi Tribe and its sovereign interest."

The council wants the Sierra Club and other environmental groups and on-reservation organizations affiliated with these groups to know they are not welcome on the Hopi Reservation, declaring them persona non grata - no longer favored or welcome.

By a resolution approved 12-0, the council said environmentalists have deprived the tribe "of markets for its coal resources" and coal revenues needed to sustain governmental services, provide jobs for tribal members and safeguard Hopi culture and tradition.

In 2005, environmental groups played a significant role in the shutdown of the Mohave Generating Station, which the Hopi Council contends "deprived the Hopi Tribe of many millions of dollars of annual operating revenues," according to the resolution.

Revenue losses from the Mohave power plant range from an estimated $6.5 million to $8.5 million annually.

The council feels that the economic viability of the Navajo Generating Station - the tribe's only remaining coal customer - is also being threatened, and that environmentalists' actions could lead to "total economic collapse of the tribe."

The Navajo Generating Station provides about $11 million a year in revenue for the tribe.

"The Mohave closure did little more than balance the politically expedient needs of these environmental organizations on the already impoverished backs of the Hopi and Navajo people ... without providing any reasonable means of replacing the tribal revenues lost to the closure," the resolution states.

In response to these allegations, the Sierra Club released a statement on Monday saying, "Sierra Club has been invited to work with many Hopi individuals and groups ... who want to stop global warming and protect the environment and feel that Peabody's coal operations on Black Mesa is a direct threat to sacred Hopi springs."

The resolution, however, states that environmental groups "have manufactured and spread misinformation concerning the water and energy resources of the Hopi Tribe in an effort to instill unfounded fears into the hearts and minds of the Hopi public."

They have acted, the council alleges, with no regard for the tribe's right to determine how best to develop and manage its natural resources. Nor, the council said, has any concern been shown for the future welfare of the tribe.

To that end, the Sierra Club responded, "We will continue to work with tribal communities on creating green jobs through clean energy solutions like transitioning old coal plants ... to clean energy from the wind and sun ... This is why it is important [to] transition from coal to [renewable energy] as fast as we can in a way that will bring better and cleaner jobs to tribal lands."

But the Hopi Tribal Council has made it very clear that they don't want any outside support.

"We need to make public that we don't want the environmental groups coming in and causing trouble for the Hopi Tribe," said Nada Talayumptewa, who chairs the council's energy team. "It's time we take a stand."

Scott Canty, tribal counsel added, "They're (environmental groups) going to oppose everything we do. This is a statement that the Hopi Tribe is going to fight back."

Former Hopi Chairman Benjamin Nuvamsa countered by stating, "[This] latest action by the ... council simply validates [the] point that they are truly supportive of Peabody Coal ... Let's now take this action as a mandate and an opportunity to educate our people and reveal the truth. We owe it to our people."

The resolution encourages all Indian nations across the country to evaluate their relationships with environmental groups and possibly reconsider those alliances in order to protect tribal sovereignty.

Besides the Sierra Club, the resolution has also banned The Natural Resources Defense Council, the National Parks Conservation Association and the Grand Canyon Trust from the Hopi Reservation.