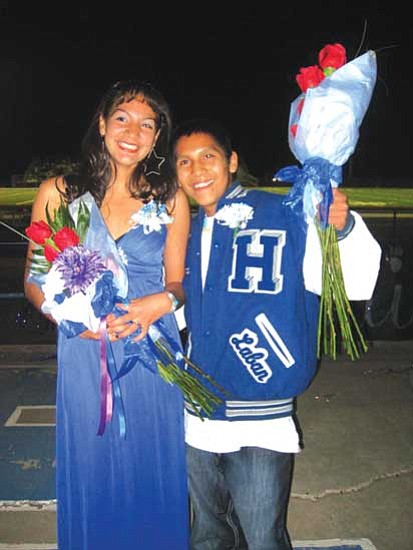 Laban and Torivio both won against stiff competition as there were six contestants for both homecoming king and queen.

Laban, a senior, said he was surprised that he won because he thought some of the other contestants would win. He said he will just have fun as homecoming king.

Laban runs cross country and track. He is also raising funds for the senior trip. He maintains a B average and plans to major in psychology at Yale. He is the son of Roma and Ronald Laban of Walpi.

Torivio, also a senior, was equally surprised that she won the queen's crown.

"I expected one of the others to get it," she said.

Torivio runs cross country and track. She is an honor roll student who plans to major in teaching special education, but hasn't selected what college she wants to attend. She is the daughter of Ruby Torivio and Felix Sanchez of Polacca.

In the powder puff game, the seniors beat the juniors 2-0 thanks to Lindsey Yoyokie "tackling" a junior in the end zone for the lone points in the game.

Yoyokie runs cross country and is part of the Hopi High radio teen show, but she may be considering a career in football.