'Standin' on the Corner' Park festival this weekend 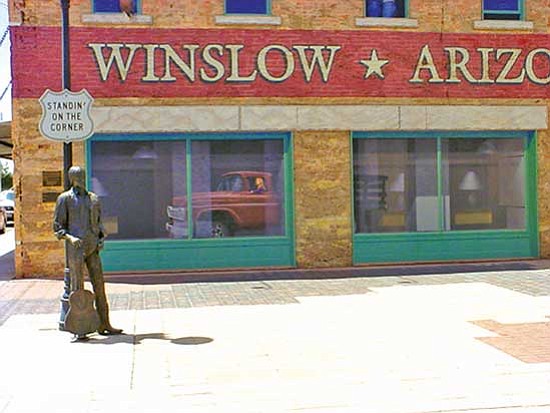 WINSLOW, Ariz. - Question: What one local event lets you actually become a part of history? Answer: The 11th Annual 'Standin' on the Corner' Park Festival, which will be held Friday and Saturday in downtown Winslow. Plenty of fun-filled family events are scheduled to take place on Historic Route 66 (Second Street) and Campbell Street behind the new Chamber of Commerce building.

For many years, the verse "Standin' on a corner in Winslow, Arizona" has drawn visitors from far and wide to stand on the world-famous corner on Historic Route 66.

The festival begins at 9 a.m. Friday morning with lots of food, arts and crafts, clothing, kids stuff and other vendors available, plus something new this year - a first-ever amateur talent show. People of all ages are encouraged to enter the talent show and show off their talents. For more information on the talent show, call (928) 587-0708.

Afternoon and evening musical performances on this day include Home Jones, Hack and the 57's, Tommy Dukes' Hall of Fame Blues Band and Mogollon, Arizona's Best Country Rock Band in the West, who will finish off the night starting at 10 p.m.

The celebration begins anew on Saturday morning at 9 a.m. with the talent show along with many other fun activities. Featured performers on this day include John Toppings, Sounds of Faith, Plateros and Northern Latino Express, concluding with performances by the 74th Street Band and Hotel California: A Salute to the Eagles starting at 8 p.m.

Over the years, thousands of people have visited "Standin' on the Corner" Park, which features an impressive two-story mural by John Pugh and a life-size bronze sculpture by Ron Adamson. The artworks depict the story behind the song, "Take It Easy," written by Glenn Frey and Jackson Browne. It became a huge hit for The Eagles during the 1970s and essentially put the community of Winslow on the map.

The mural by Pugh and the statue by Adamson depict a 1970s-era man casually standing on the corner wearing jeans, boots, shirt and vest with a guitar standing on the toe of his boot, giving life to the lyrics, "Well I'm standin' on a corner in Winslow, Arizona, such a fine sight to see."

The artwork is supplemented by planters with built-in seating, native landscaping, trees, lighting and inscribed bricks used to pave the park.

The bricks, sold by the "Standin' on the Corner" Committee, allow purchasers to have their own permanent spot on the corner in Winslow, Arizona. The sale of these personalized bricks have made the building and upkeep of this park possible. People are therefore encouraged to purchase a brick, a mural print, a mini bronze sculpture and other unique "Standin' on the Corner" park merchandise to help with park upkeep.

Historically, the "Standin' on the Corner" Park came about as a result of the efforts of the Park Committee and an intrepid group of business owners who sought to revitalize downtown Winslow after it had seemingly been frozen in time for nearly 20 years.

Prior to 1960, Winslow was a bustling town, a prominent stop for tourists along well-traveled Route 66. But after Interstate 40 was built in the mid-1970s, many tourists began bypassing Winslow and as a result, many tourism-based businesses were forced to close down.

In 1994, following the purchase and restoration of the historic La Posada Hotel, a former Fred Harvey Hotel, the committee pursued the idea of creating a park in downtown Winslow to be built around the song "Take It Easy." Work was started in 1997 and in September of 1999, the committee's efforts paid off when the park was completed and opened to the public.

More information on the Park is available at www.standinonthecorner.com, or by e-mailing ghoweth@cybertrails.com.

This year's sponsors include Golden Eagle Sales Budweiser, the city of Winslow, CableOne TV, and the Winslow Chamber of Commerce.