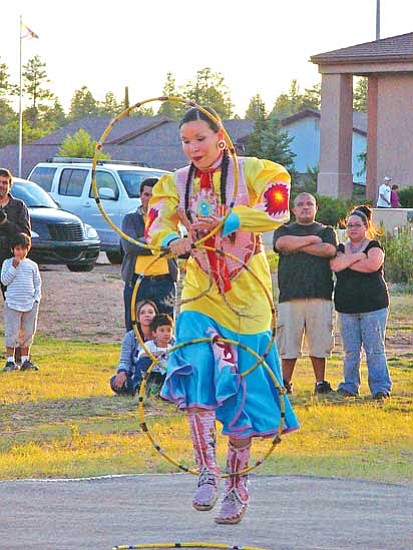 TUSAYAN, Ariz. - On the morning of Sept. 6, the sky is clear and blue. No one who attended last year's Hoop Dance Contest and Labor Day Art Market has forgotten the powerful rainstorm that drenched the roasted beef dinner the Peshlakais offer every year. The same storm delayed the hoop dance contest itself. But this year things look brighter.

There is another difference - the strong, steady voice of James Peshlakai is heard across the art market. Peshlakai released his first CD, Songs of the Navajo, earlier this year. This release gives him time to make his way through the market before the live performance.

"I am so very proud of my father," daughter Jamescita Peshlakai said. "His recent musical debut has been nominated to the Native American Music Awards for Best Album and Best Spoken Word categories. The album is authentic, true and very humbling."

Public voting is open through Oct. 3; winners will be announced at the 11th Annual NAMMY awards on Oct. 3 at the Seneca Casino and Hotel in Niagra Falls, N.Y.

Mae and Jamescita Peshlakai invite their friends and family to a NAMMY nomination and voting party today, which features a free mutton stew dinner and entertainment. The event will take place one and a half miles north of the Cameron Bridge, west of Hwy 89.

A little before noon, the Hoop Dance Contest day warms up - visitors begin arriving with more frequency, and Mae welcomes everyone to the annual event, explaining that the hoop dance contest originated as a means to honor their son, Jameson "Sonny" Peshlakai, who lost his life in an automobile accident 10 years earlier. She also thanked all of the vendors who displayed their arts and crafts at the market throughout the summer.

James explained the evolution of the hoop dance event and the Peshlakai Foundation.

"Everyone liked Jameson," James said. "After we lost him, people suggested we hold a pow wow and hoop dance contest in his honor. We started raising funds through the Peshlakai Foundation, but as time passed we learned that it was hard. As more people here supported us, we renamed the hoop dance contest to the Grand Canyon Hoop Dance Contest.

"We are real horse people here, so the foundation began putting on horse clinics, teaching about the traditional raising of livestock and farming," Peshlakai continued. "We are sharing the teachings of the digging stick at traditional gardens."

Peshlakai shared that many people who are returning to their traditional ways have found support through the Peshlakai Foundation. We are thankful to the old homesteader's grandchildren who remain here.

During dance performances - including a hoop dance demonstration by Peshlakai's young granddaughter Jamie Butler, the Horse Dance by Derrick Suwaima Davis and a Butterfly Dance by more granddaughters - a blessing for the food was offered by Edward Little Sr. and then the ground oven roasted beef dinner was served by the Peshlakai family. People from across the world, including Germany, France and Japan, enjoyed the tender beef, corn, potatoes and bread.

Ryon Polequaptewa, a member of the Hopi Tribe, served as the emcee for the event; he skillfully maintained cheerful banter throughout the afternoon - as everyone awaited the arrival of more hoop dance contestants.

"The Apache have taken my hoop dancers," James explained. "They are competing down south, but have committed to coming up to dance here afterwards, and have asked us to wait for their arrival."

But as the sun made its way across the sky, anticipation grew stronger - and finally the moment arrived.

The flags were posted, and the hoop dance contestants lined up for the Grand Entry.

After the exciting event, the votes from various judges throughout the artists market were tallied.

The celebration continued into the dusk as families gathered their tired children and settled prepared to leave the Canyon. Vendors tied up their booths to await the following day at the market, featuring Cowboy and Indians singers as well as the fry bread contest. Peshlakai bid his friends and visitors a good evening - already planning next year's event.