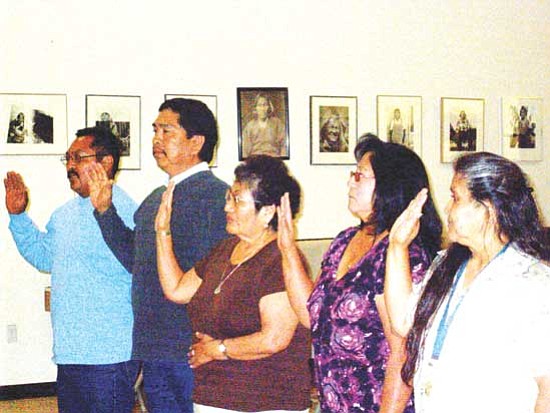 HOTEVILLA, Ariz. - Just like with national elections, local Native communities rally and turn out to support their local candidates. Ballots are cast to endorse candidates based on family loyalty, confidence in their governing abilities or simply to have someone new in those selected vacant political seats.

This year was the fourth year in a regular cycle of elections. The Village of Hotevilla held a governing board election on Aug. 25, which yielded the following winners for both two-year and four-year terms of office.

Other village members who ran but did not win seats on the board were Sandra Dennis, Ruth Ami, Oran Selestewa and Lorencita Martin.

Acccording to Marilyn Clashin, HEC registrar, the Hotevilla election went without much additional legwork or hassle. This was due in part to the volunteer partnership-cooperation team who served as the formal election committee.

"We went strictly by the rules and procedures for a regular reservation-wide Hopi tribal election and just downsized the voter numbers who were registered to vote at the village. The actual day of voting was pretty smooth with only two village members turned away because they had not updated their voter information, [which] is required in the Hopi election law," Clashin said.

Though the Third Mesa community of Hotevilla is considered a "traditional" village, there is still the business of running an administrative office and addressing village needs like housing repair, clean up for communal areas (like the spring or cultural activity areas), student programs and elderly assistance support projects, budget assessment and general everyday tasks that needs to be attended to on a daily basis for the welfare of their community.

Clashin added, "I encourage everyone who wants to vote and participate in their village elections and the upcoming general tribal election to check with the Hopi Election Board office to update their ... information to make sure they can fully participate in our upcoming Chairman and Vice Chairman campaigns later this fall."

Clashin noted that there were more younger voters who participated in the election, which she deemed "very encouraging."

The new board was sworn in on Sept. 9 at the Hotevilla Youth and Elderly Building.

For questions about the upcoming elections, call the Hotevilla Elections office at (928) 734-1021 or 734-2420, or stop by their offices located next to the Hotevilla Post Office at the village administration building.