Biologists fear color of fall may be fading 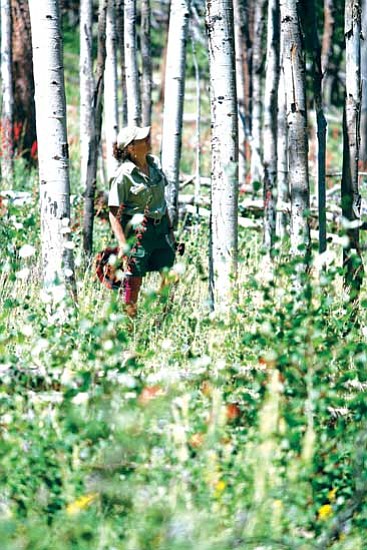 <i>Ecological Restoration Institute/NAU</i><br> Forest Service Southwest Region Plant Pathologist Mary Lou Fairweather surveys a stand of aspen that is fenced and protected from browsing animals. This grove near Williams shows a diversity of plants and young aspen suckers growing under the older trees.

FLAGSTAFF, Ariz. - The soft sound of quaking aspen leaves trembling on the slightest breeze is the sound of summer in the mountains of the West. But that sound has become softer, and researchers believe the color of fall may be fading, too.

This because of an extraordinarily rapid dieback of the aspen, a phenomenon biologists are calling SAD, or Sudden Aspen Decline.

In northern Arizona, Forest Service officials are reporting a 60 to 95 percent mortality rate in the low-elevation aspen groves, around 7,000 feet, of the Kaibab and Coconino national forests.

"We are concerned because it's a tree that brings people into the woods," said Northern Arizona University forestry graduate student Tom Zegler, one of the researchers diagnosing the sick trees. "Aspen also have an extremely high ecological value. Per acre they provide for a greater diversity of wildlife than the sea of ponderosa pine trees around them and a greater diversity of plants can grow beneath them."

In addition to the biological implications, there may also be economic ramifications associated with the decline of the aspen groves in the region surrounding Flagstaff.

"The fall colors associated with the turning of the aspen leaves have provided a magnet for visitors from throughout Arizona for many generations," said NAU economics professor Ronald Gunderson. "Families who have made the traditional pilgrimage to Flagstaff to view the aspen each year will begin to seek alternative venues over time. A decline in visitors to the local region is unwelcome news to merchants in the hospitality industry who benefit from the spending by these tourists particularly during the time of year when the summer visitation has fallen off."

Recent drought years and warmer temperatures may be playing a role in SAD, making the trees more vulnerable to a suite of pests and pathogens. The year 2000 was the worst drought year on record in Arizona, only to be broken two years later. And the drought years aren't over. Most climate models predict a warmer and much drier future climate in the Southwest and extreme events, such as droughts, are expected to increase in frequency and magnitude.

Aspen's role in the ecosystem is to grow quickly after a large land disturbance, like a wildfire, that opens an area to sunlight. The sun-loving aspen trees shoot up and provide shade for other plants to grow. In 80 years or so, mixed conifers eventually grow taller than the aspen and begin to take over the area. Aspen only grow to be about 150 years old, but researchers say what's happening now is too fast for natural plant succession.

Ironically, on a place called Aspen Hill south of Williams, researchers have been unable to find any aspen except in a small grove that has been fenced off from animals, because the deer and elk aren't helping the aspen any either.

"Compared to conifers, aspen are tasty and more nutritious," Zegler said. "The leaves are easier to digest and the chlorophyll-containing bark is itself a food source."

Graduate student Katie Ireland from NAU's Ecological Restoration Institute is exploring the long-term dynamics of aspen stands. She is particularly interested in the influence of fire, which has been suppressed in the American West since settlement in the late 1880s.

"Fire exclusion is thought to be one factor in longer term decline of aspen throughout the western U.S. Fire promotes aspen regeneration by removing the mature aspen stems and promoting the growth of new aspen suckers."

Researchers don't know if SAD has damaged the root systems - whether through climate change, insects, diseases, browsing animals or lack of frequent fire - to the point that aspen groves won't sprout new suckers. If a root system dies, they fear that particular DNA could be lost forever.

"Since we don't know why SAD is occurring, and what will bring back the aspen, land managers don't want to run fire through or cut down a stand without knowing if the groves will regenerate," Zegler said. "If they burn the whole site or cut them all down, they may be able to shut off that hormonal response to the root suckering system and stimulate new growth. But what if nothing grows back? I'm hoping our data will help them."

The Kaibab National Forest engaged the School of Forestry and the ERI in a joint research effort to find out what's happening to the aspen and whether this popular deciduous tree is fading permanently from the landscape of its lower elevation range.