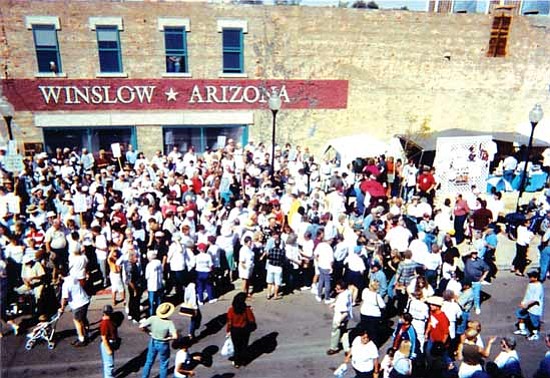 <i>Courtesy photo</i><br> An enthusiastic crowd mills about at last year's "Standin' on the Corner" Park Festival in downtown Winslow.

WINSLOW, Ariz. - The city of Winslow is proud to celebrate the 11th Annual "Standin' on the Corner" Park Festival to be held on Friday and Saturday, Sept. 25-26 in downtown Winslow on Historic Route 66 (Second Street) and Campbell Street behind the new Chamber of Commerce building.

The festival begins at 9 a.m. Sept. 25 with a first-ever amateur talent show and music starting in the afternoon. People of all ages are encouraged to enter the talent show and show off their talents. People wanting more information can call (928) 587-0708. Featured performers on this day include Home Jones, Hack and the 57's, Tommy Dukes' Hall of Fame Blues Band and Mogollon.

The celebration kicks off again Sept. 26 at 9 a.m. with the talent show, lots of food, arts and crafts, clothing, kids stuff and other vendors available. Featured performers on this day include John Toppings, Sounds of Faith, Plateros and Northern Latino Express, finishing with Hotel California and the 74th Street Band.

The well-known single "Take It Easy," written by Glenn Frey and Jackson Browne, became a hit in the 1970s for The Eagles and put the community of Winslow on the map. The verse "Standin' on a corner in Winslow, Arizona" draws visitors from far and wide to stand on the famous corner on Historic Route 66.

The two-story mural by Pugh and the statue by Adamson depict a 1970s-era man standing on the corner wearing jeans, boots, shirt and vest with a guitar standing on the toe of his boot, giving life to the lyrics, "Well I'm standin' on a corner in Winslow, Arizona, such a fine sight to see."

A unique facet of the park includes inscribed bricks sold by the Standin' on the Corner Committee, allowing purchasers to have a permanent spot on the corner in Winslow, Arizona. The sale of these bricks have made the building and upkeep of this park possible. People are encouraged to purchase a brick, a mural print, a mini bronze sculpture or other "Standin' on the Corner" park merchandise.

Historically, the "Standin' on a Corner" Park came about as a result of the efforts of the Standin' on the Corner Park Committee and an intrepid group of business owners who sought to revitalize downtown Winslow. In 1994, following the purchase and restoration of the La Posada Hotel, the Committee pursued the idea of creating a park in downtown Winslow to be built around the song "Take It Easy." Their efforts eventually came to fruition in September of 1999 when the park was completed and opened to the public.

More information is available at www.standinonthecorner.com. For more information about promotional information for the "Standin' on the Corner" Park Festival, e-mail ghoweth@cybertrails.com.

This year's sponsors include Golden Eagle Sales Budweiser, the city of Winslow, CableOne TV, and the Winslow Chamber of Commerce.