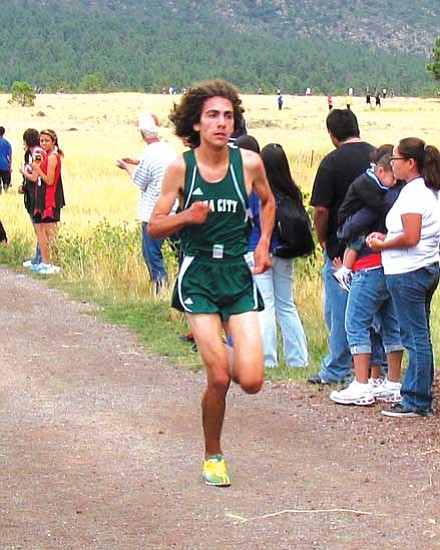 Orman ran nearly 30 seconds faster than the existing course record, but senior Brian Shrader of Sinagua High School, ranked among the top 10 high school runners in the nation in a pre-season poll, blazed a new course record winning in 16:12 on the challenging 5k course.

The Peaks Invitational is among the largest and most competitive high school cross country meets of the season in Arizona. Dozens of Valley schools travel north to escape the scorching September heat in the Phoenix region, and teams such as Gallup, N.M. cross the state line seeking to run against top out-of-state competition. The meet is so large that the meet directors have to break up the nearly 40 teams into two separate varsity races.

In the Summit Varsity Race for the top-seeded teams, Hopi High School (115 points) won the boys team title ahead of Tuba City (167 points), with defending Peaks Invitational champion Cesar Chavez High School (171 points) in third. With 19 state championship titles each, both Hopi and Tuba City showed why they are consistently ranked among the best teams in Arizona and the Southwest. Both Hopi (in the 1A/2A division) and Tuba City (in the 3A division) will be competing for their unprecedented 20th state championship titles this season - far more than any other schools in Arizona.

In the girls race, Chinle's Rolonda Jumbo won by more than 40 seconds in 19:51. Jumbo was recently ranked among the top 25 high school cross country runners in the nation in a pre-season poll. Tuba City junior April Tracy ran a terrific race to place third (21:24) leading the Lady Warriors to an eighth place team finish in the seeded Summit Varsity race. After a summer of running, Tracy is showing a remarkable improvement after what were already two very strong freshman and sophomore seasons. At this point, Tracy appears to be one of the few 3A runners who might be able to give Jumbo a challenging race in the 2009 season.