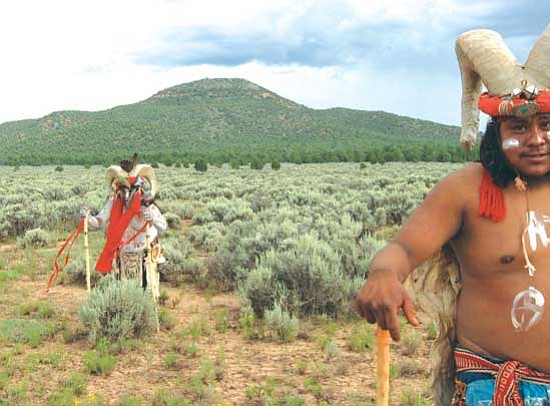 <i>Photo by Brenda Norrell</i><br> Guardians of the Grand Canyon pause before sacred Red Butte, which is located near a proposed uranium mine. Several prominent environmental groups have threatened to sue the Bureau of Land Management (BLM) over what they feel are threats to endangered species around the Grand Canyon.

The notice alleges that the BLM has failed to consult with the U.S. Fish and Wildlife Service (FWS) on the potential impacts of the Arizona One uranium mine, located just north of Grand Canyon National Park, to threatened and endangered species.

The notice alleges that the BLM has been relying on old information and an outdated, inadequate environmental analysis, which violates the National Environmental Policy Act (NEPA).

It further alleges that the agency failed to supplement its 1988 environmental assessment for the mine and prepare a new environmental impact statement in light of new science and circumstances relevant to the mine's potential impacts.

The Arizona One mine is located within the one million acres of land that were temporarily protected from mining via a segregation order enacted by the Department of the Interior on July 20.

The notice of the lawsuit comes on the heels of the Arizona Department of Environmental Quality (ADEQ) approving an air quality permit for Denison Mines to operate the Arizona One mine.

It would be the first uranium mine in the area in about 20 years.

Environmentalists and several tribes are concerned that the mine would contaminate the water in the Colorado River and its tributaries. Denison would haul the uranium 300 miles to Blanding, Utah, where it would be milled and used in nuclear power plants.

Taylor McKinnon, spokesman for the Center for Biological Diversity, said in a news release that because the mine has been closed for more than a decade that a new "plan of operations" is legally required, since BLM regulations hold that those plans are only in effect while mines are in operation. Mining officials have stated in the media that mining could resume at the Arizona One mine as early as this fall.

"Today's notice affords the Bureau of Land Management both the opportunity and justification to correct its illegal course," McKinnon said. "The Grand Canyon and its endangered species deserve complete protection from the uranium industry. Relying on outdated and incomplete reviews falls far short of that standard."

In 1984, a flash flood swept four tons of high-grade uranium ore from a uranium mine near Arizona One through Hack Canyon and Kanab Creek into the Colorado River and Grand Canyon National Park. The 1988 environmental assessment states that the Arizona One mine, which is constructed in the bottom of a wash, is prone to unplanned releases that would follow the same water course. Since 1988, four species of fish native to the Colorado River, as well as southwestern willow flycatchers, have been added to the endangered species list, and critical habitat has been designated for their recovery.

Roger Clark, spokesman with the Grand Canyon Trust, said in the news release that experience has shown that uranium development can permanently poison land and water in this arid region.

"Prohibiting uranium mining in Grand Canyon watersheds is essential to prevent further contamination of our nation's irreplaceable resources," he said.

Stacey Hamburg, spokeswoman with the Sierra Club's Grand Canyon Chapter, said in the news release that uranium mining has great potential to contaminate water that flows into the Colorado River via various seeps, springs, and streams.

"Our drinking water and all of the Grand Canyon 's wildlife is just too important to risk for the short-term profits of this mining company," she said.

The BLM has 60 days to correct its violations of the Endangered Species Act before being sued. Conservation groups may file suit sooner on claims relating to the National Environmental Policy Act and Mining Law of 1872 should the BLM allow mining to start before that 60-day period expires.