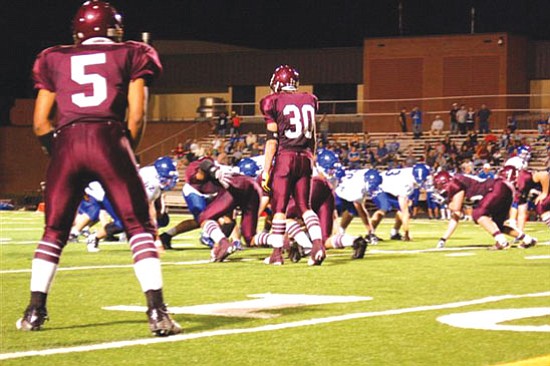 <i>Courtesy photo</i><br> The Winslow Bulldogs in recent football action. After suffering their first loss of the season to Snowflake last Friday, the Bulldogs fell to 2-1 for the season. Their next game will be against the Ganado Hornets in Ganado on Friday.

WINSLOW, Ariz. - The Winslow Bulldogs dominated the Sinagua Mustangs on their way to a 33-0 victory on Friday, Sept. 5 at Emil Nasser Stadium. The win was Winslow's second in as many outings and Sinagua's second loss in as many games.

The Winslow defense totally controlled the Mustangs and saw that most of the game was played in Sinagua territory. The Bulldogs recovered a fumble at the Mustang 39 yard line and scored with just 23 seconds off the clock on their first play from scrimmage. Kraig Shirley hit Tevin Renfro with a 39 yard pass and Anthony Huerta converted for a 7-0 lead.

Shirley ran for Winslow's second touchdown from five yards out to complete a short 39 yard drive. Huerta's conversion increased the lead to 14-0 with 6:06 still left in the first period.

Renfro caught another scoring pass from Shirley from 10 yards out and the conversion gave Winslow a 21-0 lead with 1:04 still left in the quarter.

Chayse Russell got the first score of the second quarter on a 15 yard run with 97 left in the period. The conversion failed and Winslow led 27-0.

Shirley connected with Huerta on a five yard pass with just 3:44 left in the half. That wound up being the final score of the game as the conversion failed and Winslow took a 33-0 lead to the locker room.

The Bulldogs played a host of reserves in the second half and seemed content to keep the clock running. The defense continued to hold Sinagua at bay and preserved the shutout.