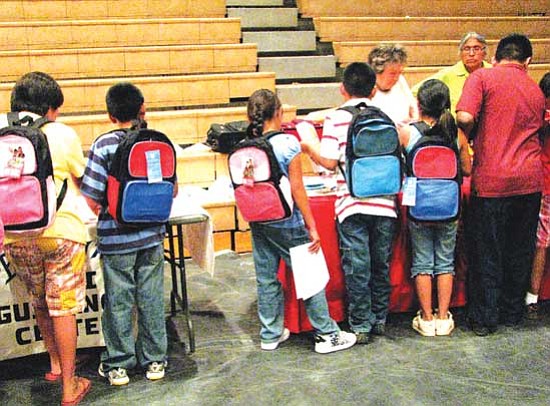 <i>Christian Bigwater</i><br> Students gather at a recent event in Tuba City where they were given brand new backpacks and school supplies, thanks in part to efforts by the National Backpack Program and Navajo Nation Council Delegate Hope McDonald LoneTree. About 4,000 backpacks were given to students throughout the western Navajo Nation.

TUBA CITY, Ariz. - For the second year, thousands of children on the western Navajo Nation were given brand new school backpacks, thanks to Navajo Council Delegate Hope MacDonald LoneTree (Coalmine Canyon and TohNaneesDizi Chapters), the Office Depot Foundation and the National Foundation of Women Legislators.

Students in kindergarten through sixth grade recently gathered at the Tuba City Community Center eager to receive their new bags with school supplies.

Last year, the Navajo Nation became the first Native American tribe in the country to participate in this donation program and they received a total of 4,000 backpacks. Since 2001, the Office Depot Foundation has organized the National Backpack Program and they strongly believe it makes a difference in a child's academics by boosting their self-esteem and by building self-confidence.

"It's for the kids, some of whom are not able to afford school supplies," said MacDonald LoneTree. "It warms my heart to see happy children and to also see that this program helps eliminate that burden of school supply costs, which often gets in the way of a child's learning."

The national economy has had some effects on this year's program.

"This year was hard because of the national economy," MacDonald LoneTree said. "We are lucky to serve the same schools we did last year, and with the same amount of backpacks as we did before."

The National Backpack Program has had a positive impact on the community.

Evelyn B. Yazzie, a fourth grade teacher at the Eagle's Nest Intermediate School agrees with Higgins.

"Students need school supplies and most of them don't have the supplies they need, including a backpack," Yazzie said. "It affects their learning when they have nothing to carry their homework in. The program even helps me as a teacher, because the backpacks help the students stay organized."

This year, the national program provided more than 300,000 new backpacks to non-profit organizations, schools and agencies across the United States, as well as to other countries around the world. The program is now in its ninth year and the foundation will be reaching a significant milestone of donating more than two million backpacks since its inception.

MacDonald LoneTree appreciates the help of the various programs that collaborated efforts to make this program successful, including the TohNanees Dizi Boys and Girls Club, the Health Promotion and Disease Prevention program at the Tuba City Regional Health Care Center, the Navajo Nation Department of Behavioral Health Services, the Navajo Office of Youth Development, Coconino County Alliance Against Drugs and the Tuba City Unified School District.

She also expressed her appreciation to the National Foundation for Women Legislators and the Office Depot Foundation for including students in Indian Country - particularly the Navajo Nation.

"This community partnership is important," MacDonald LoneTree said. "We invite wellness programs in the region to promote their causes. We set up the event with various health programs, so they have the opportunity to promote health and substance abuse prevention with the children."

MacDonald LoneTree's goal is to increase the amount of donations to the program, so that every student who needs school supplies on the Navajo Nation is able to receive a new backpack with supplies.

Navajo Council Speaker Lawrence T. Morgan commended MacDonald LoneTree for her continued efforts to improve the lives of the Navajo people and especially the youth.

"Once again, thanks to the various organizations and to Mrs. MacDonald LoneTree, we get to see 4,000 more smiling faces as the school year begins," Speaker Morgan said. "I am encouraged by her efforts, by her determination and her commitment to ensuring the education of our Navajo children."

The backpacks come in five different colors. Each bag has two zippered front pockets and padded straps for comfort and support, the bags also include a ruler, crayons, a glue stick, a pen, pencil, a pencil sharpener and an eraser.