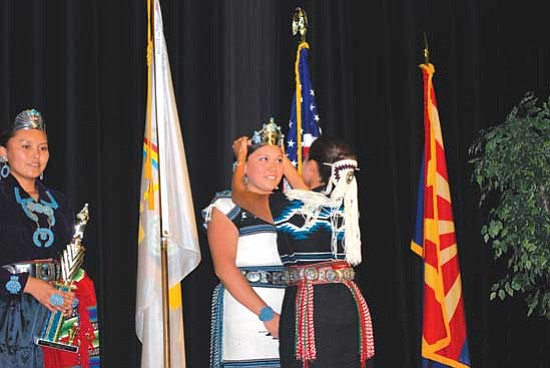 Black, the daughter of Rooney Sr. and Mildred Black of Tuba City, said this year's pageant contestants bonded in friendship and formed a group to help people. Black said as Miss Greyhills Princess, she represents the school at various functions and promotes traditional Native American values. The other four young ladies intend to do the same. Each plan to do community service, help charities and their elders.

As a senior, Black decided to run for Miss Greyhills to try something "different and new."

Black eventually hopes to go to college at either the University of Arizona or Stanford University to study psychology.

"I'm a very detailed person and I'm very interested in how the mind works," she explained. Black wants to study mental disorders such as split personalities.

Despite the new friendships, one contestant, Ferlynn Lomahaptewa, a GAHS junior who was the third runner-up, has a different experience.

"I was friends with all of them," she said.

Lomahaptewa is from Moencopi Village. She is Coyote Clan. Her mother is Ethel Mae Lomahaptewa and her father is Vinton Lomahaptewa.

Lomahaptewa plans to attend college and wants to learn to operate heavy machinery. She is always ready to help the elders of her village. Her summer job was installing window screens for tribal elders.

Tohannie earned other titles in the past, including Miss Tonalea and Miss Western Navajo Teen. Though she has seven trophies of her own, Tohannie was equally proud of her sister Charyssa, 7, who won Little Miss Tonalea last year.

She hopes to attend college and wants a career in the medical field.

The first time she ran for Little Miss Shonto in 2002, she took first runner-up and claimed the crown the following year. Last year she was Miss Dook'o'oosliid.

Like Black, she plans to study psychology in college.

"I want to work with people. I like to give advice and help other people," she said.