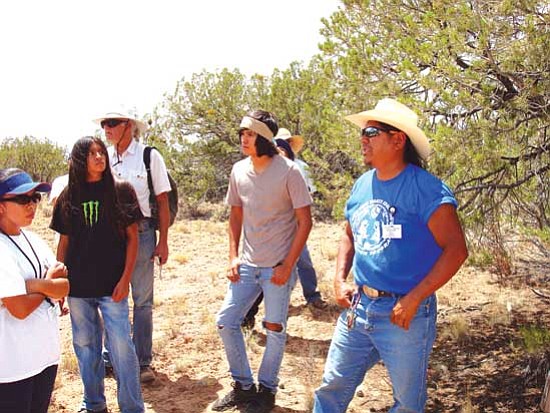 KEAMS CANYON, Ariz. - Hopi Tribe Forestry Technician Woody Shattuck spent many a summer on the Hopi Reservation with his grandfather, who made kachina dolls, and his grandmother, who made pottery.

His childhood memories and respect for Hopi culture have brought him back as an adult. His knowledge has provided him with the tools he needs to make a difference on the land.

"It's a good feeling to come back to contribute," he said

Shattuck and Hopi Wildlife Manager Darren Talayumptewa are concerned about the pinyon and juniper woodlands. They are particularly focused on some 300 acres of pinyon and juniper forest north of Keams Canyon, a popular recreational spot where Hopi families harvest pinyon nuts each year.

Here, sage and junipers have taken over, crowding out the grasses and the pinyon trees. Without grasses wildlife habitat is in decline, the ground is eroding and natural fire can't burn through the area.

"We have a lot of lightning that burns single trees, but then the fire burns out," Talayumptewa said.

Without fire burning along the ground and cleaning up the dead and dying debris, nutrients are not being recycled back into the soil, say researchers. And there are other problems affecting the woodland health and its ability to regenerate. Bark beetles have claimed some 60 percent of the trees, mistletoe is prevalent and law enforcement officers are not. Trees, already weakened by insects, disease and drought, also are under attack by firewood gatherers who are cutting off live branches.

Seeking land management solutions, Talayumptewa invited representatives from the Ecological Restoration Institute at Northern Arizona University to come out and take a look this summer.

"We have to start somewhere," said Shattuck. "We could use this as a test site and apply what we learn to larger areas. If we mess up, we haven't done too much damage."

ERI Community Outreach Coordinator Dennis Lund suggests removing the younger trees, thus allowing the bigger ones to grow bigger and stronger. "I would take out the juniper and leave the excess wood on the ground for people to collect for firewood and fence posts."

Another suggestion is writing a grant that would include enclosing the area with a fence and adding law enforcement officers to help protect the natural resources.

Returning fire to the ecosystem also will benefit the health of the area. "Prescribed fire would help restore the woodlands by creating openings for grasses and forbs to grow - food for deer and elk - and prevent wind erosion. Fire also will kill the sickly trees that are competing with healthier trees for space and water," said ERI Community Outreach Program Manager Bruce Greco.

Shattuck and Talayumptewa hope to increase the number and health of pinyon trees and the production of pinyon nuts for the Hopi people. In addition, they expect to apply lessons learned on these 300 acres to larger forest restoration projects on the reservation.