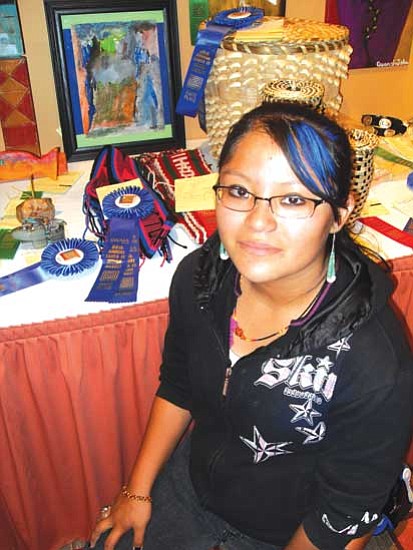 Alicia Nequatewa is an up and coming artist at Indian Market. She won first and second place in the Youth Division for her belt textile work.

SANTA FE, N.M. - The exclusive Indian Market preview show held the night before Indian Market officially opens on Saturday morning was jam-packed. There were a number of serious collectors, patrons, and celebrities who are extremely appreciative of serious Indian art.

This event is also open to the Native artists that participate in the Market and to Southwestern Association of Indian Art (SWAIA) members, who do take advantage of this preview to see all of the 1,100 pieces of artwork in one location. In all, over 500 tribal artists were represented, with final prize money totalling just over $87,000.

The suspense and nervousness of the attending artists who were there to find out if they had won anything was extremely noticeable since winning at Indian Market can make or break your bank as well as establishing or continuing your own art reputation.

This year's big winners for Best of Show were Darryl and Rebecca Begay, who won for their incredible silver concho belt based on the historical Navajo Long Walk. The belt comprised 15 cast figures that each represented persons in Navajo history as well as people who were inspirational to the Begays in their art of jewelry making.

The buckle in the Begay belt was a silver outline of Mount Taylor along with several figures. One was somewhat reminiscent of Mother Theresa, who is seen as a worldwide icon of healing, compassion and benevolence to people of all colors and walks of life.

The Begays were extremely humbled by their win and thanked everyone in attendance for their support and appreciation of their artwork.

Big winners for the category of Wooden Pueblo Carvings and Sculpture were carvers Randy Brokeshoulder and longtime master carver Loren Phillips of Lower Moencopi in Division B.

Phillips, who was at the Friday night preview with his wife, Helena and his grandson, Charles George, is a longtime winner of such major awards.

He was pleased with the Best of Division win since it has a worldwide art audience.

Phillips has been carving for over a quarter of a century, after learning from and being encouraged by his uncle, the late Wilson Kaye.

When Philips was asked how long he had been carving, he said with a smile, "About 25 years seriously - the other years were just practice."

Wondering how carving has changed and what innovations in tools has impacted this art, Philips said when he first started out, he used only knives that cost about 50 cents to $1 that he would find at most of the reservation area flea markets.

It's only been in the past 10 years or so that he has moved onto tools like a Chicago drill and computer mixed paints for his artwork, but he still only creates one piece at a time and does all the painting by hand.

"I tried once to do two dolls at a time, but it didn't work for me. I like the single, one-on-one work where I am working on one piece. It's in my head, my heart, my hands."

Does Phillips ever talk with other carvers about their work or their work styles?

"No, not really. I think it's a private thing. But when I go to shows and see other carvers' work, when I see how nicely they have completed a piece, I do compliment them and appreciate how they have finished something."

Asking Phillips what he thought about some of the younger carvers like Brokeshoulder, he said, "These younger kids who are carving nowadays are pretty smart, while I am one of those old fashioned carvers. They know so much about technology and are so far ahead of us older carvers that started out way back when."

"When I see their work, it just amazes me. They have so much figured out already, I don't think I could teach them much. So I always tell my carver friends who are my age, 'We gotta watch these kids. They are good.' But I am glad some of our younger Hopis are carving, that they are still keeping one of our traditions alive and strong. It makes me want to hold back a little bit on entering my own work to give ... these younger kids an opportunity to enter and win. They deserve it. If I can encourage them by doing this, then I am happy," he added.

In the youth division for first and second place in the Textiles and Weavings classification was the young granddaughter of famed Hopi jeweler Verma Nequatewa of Hotevilla, Alicia Jean Nequatewa, who took top honors in the 17 years and under age division.

Alicia also placed first and second for at the 2009 Annual Hopi Show for her textile work.

She is the daughter of Jan and Bryson Nequatewa who are also artists. Her mother Jan, is a painter and her father, Bryson, a carver and glass-blower.