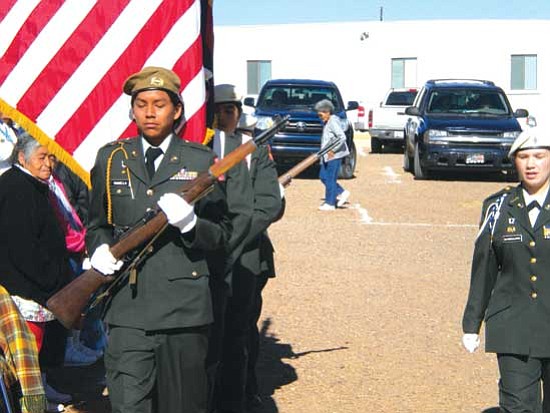 The Honor Guard members march as they present colors at the event.

The ceremony started with the cadets posting the colors around 9:10 a.m. They not only posted the colors in honor of the elders, but also performed community service. The cadets helped fix the chairs for the elders and set them up. They also got to enjoy watching the dancers perform as well.

At 11:00 a.m. the honor guard went to the Cultural Center to eat and celebrate Cadet Corporal Zachary Youvella receiving cadet of the month.

Cadet Brandi Navenma said, "It was fun posting colors! And we did a good job. Watching the traditional dancers and performers was fun too. I enjoyed it a lot."

The Hopi JROTC Honor Guard will be doing more activities in the near future.