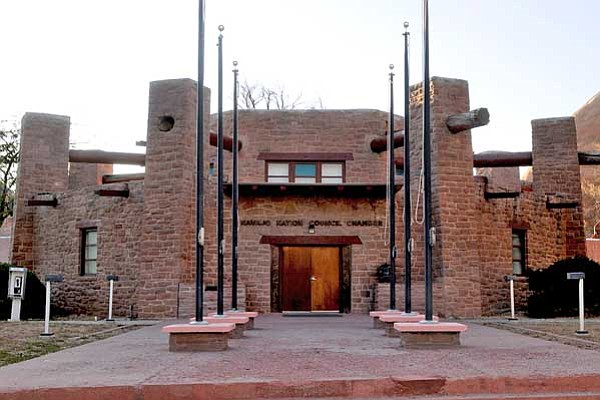 WINDOW ROCK, Ariz. - The 21st Navajo Nation Council concluded its 2009 Fall Session on Thursday. Highlights of the final session include the enacting of the Navajo Nation All-Terrain Vehicles Act of 2009, tabling legislation to transfer administration of Canyon De Chelly National Monument from the National Park Service to the Navajo Nation and sending legislation negotiating the purchase of the Arizona Snowbowl back to the Resources Committee of the Council for further review.

Legislation No. 0418-08, sponsored by George Arthur was tabled to the Winter Session. The legislation relates to resources and intergovernmental relations to repeal a resolution adopted July 8, 1930 by the Navajo Tribal Council. The resolution authorizes the President of the United States to establish the Canyon De Chelly National Monument to be administered by the National Park Service (NPS) and to adopt, as the official position of the Navajo Nation, the transfer of the administration, oversight and funding of the Monument from the NPS to the Navajo Nation.

This legislation was presented as new legislation under new business. It was presented during the last regular Council session where it had been tabled and referred back to the Resources Committee to carry out public forums, but Arthur explained that was not done.

He explained, "Back in the 1930s, the Navajo Tribal Council turned to the federal government to have this particular site managed and it was carried out by ... Congress to do so. The language is very clear; the intent of the congressional act was to solely manage the park, which includes the various historic sites that are there."

Arthur said several community discussions were held within the Chinle Chapter, located near Canyon De Chelly, several times. The Committee also discussed the issue with the NPS and the Navajo Nation Parks and Recreation Department as well.

In other Council action, Legislation No. 0515-09, sponsored by Hope MacDonald LoneTree and Nelson Begaye, passed by a vote of 38-27. This legislation relates to public safety to enact the Navajo Nation All-Terrain Vehicles Act of 2009.

MacDonald LoneTree said the legislation is good for the Navajo Nation.

"I bring this legislation to you, so we can have a good discussion about injuries in our communities," MacDonald LoneTree said. "The primary reason we are promoting this is to prevent injuries and to promote safety - we see young children riding these ATVs dangerously."

In a presentation to the Council, it was reported that ATV injuries could cost as much as $72,000 for helicopter, inpatient and follow-up costs associated with ATV injuries, which are preventable if proper measures are taken to avoid injury and accidents.

Katherine Benally spoke in favor of this legislation, stating, "If we had such a law in place, [many] deaths and injuries could have been prevented. [However, a] lot of concern is that we do not have the law enforcement to enforce it."

Also discussed was Legislation No. 0522-09, sponsored by Johnny Naize, which passed by a vote of 40-21. The legislation relates to community development and finance to enact the Local Sales Tax Act of 2009. This legislation raised concerns of small chapters having to compete with tax revenues of larger chapters. Chinle Chapter was used as an example.

Nelson Begaye said, "There are surrounding chapters that go to Chinle to do business. While there, people do a lot of shopping ... and Chinle Chapter benefits from this. However, if Chinle Chapter gets certified, they will get about 80 percent of the money and this legislation speaks to that concern."

In other business, Legislation No. 0606-09, sponsored by Lawrence Platero, passed by a vote of 48-12. This legislation relates to an emergency to approve the employment contract between the Navajo Nation and Ms. Carleen Chino of Acoma Pueblo, N.M., to serve as executive director of the Navajo Nation Gaming Regulatory Office for a term of four years.

"I ask for your support allowing me to be the executive director of the Navajo Nation Gaming Regulatory Office," she said. "I was selected to offer [gaming staff] guidance, the skills and knowledge that I accumulated over the last 12 years."

In other Council action, Legislation No. 0613-09, sponsored by Leonard Teller, passed by a vote of 67-0. The legislation relates to an emergency expressing support for proposed federal legislation to exclude Veteran's Compensation and Survivors' Benefits from the definition of income to NAHASDA.

Teller explained that current provisions limit people from receiving housing assistance. He said Congresswoman Ann Kirkpatrick (D-AZ) is sponsoring legislation at the federal level in regards to this.

Legislation 0616-09, sponsored by Raymond Maxx was not put to vote, but was referred back to the Resources Committee of the Navajo Nation Council by a vote of 41-27 for further review. This legislation relates to an emergency authorizing the Navajo Nation Land Department to secure an appraisal report negotiating the purchase and purchase of the Arizona Snowbowl ski resort subject to Navajo Nation laws.

Omer Begay commented, "The law says there has to be an offer. In this case, the property is not for sale and it has never been offered to us."

At 3:16 p.m., Speaker Lawrence T. Morgan adjourned the 2009 Fall Session. A copy of the full agenda can be downloaded by visiting the Navajo Nation Council Web site at www.navajonationcouncil.org.