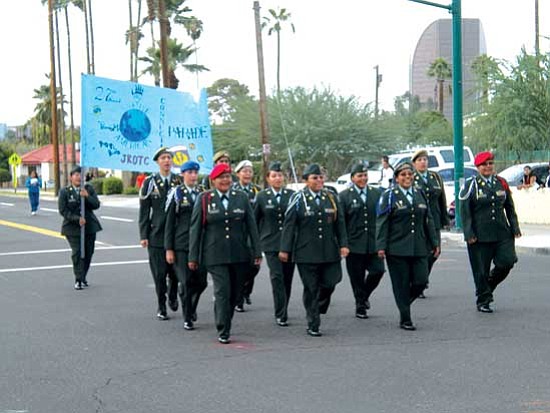 <i>Courtesy photo</i><br> The Hopi Bruin Battalion enjoy the cheers of spectators and smile as they chant their way through the annual Native American Recognition Days (NARD) parade parade in Phoenix.

PHOENIX, Ariz. - On Oct. 10, the Hopi JROTC Bruin Battalion marched behind the Hopi JROTC Colorguard Team in the annual Native American Recognition Days (NARD) parade, held each year in the greater Phoenix area in celebration and honor of Native American cultures. Communities from across Arizona came together to showcase their respective tribes.

This year's theme was "Preserving Mother Earth," which reminds each of us to treat Mother Earth as our own mother and to respect her daily.

As the parade began, the Bruin Battalion motivated themselves as well as local spectators with their "Motivation" chant. They marched their way through the one-mile downtown highway. Onlookers saw the Bruin Battalion as good, loud, and sharp cadets. They cheered for the cadets as they made their way down to the judges' stand.

When the cadets reached the judges' stand, they performed their special "Mother Earth" chant. They cadets had an awesome performance. Even though there were only 10 cadets - eight female and two male - they rocked the judges and the crowd with their chants.

The cadets had a great audience, some of which were Bruin Fans who came out from Hopi territory. They cheered the Bruin Battalion and gave them their motivation boost.

Although the cadets' voices became hoarse, they were satisfied with how well they did and that they presented themselves, their high school, and the JROTC Bruin Battalion program well.

They made their way back home tired and exhausted from chanting their loudest in 85 degree weather, but satisfied that they did a good job.