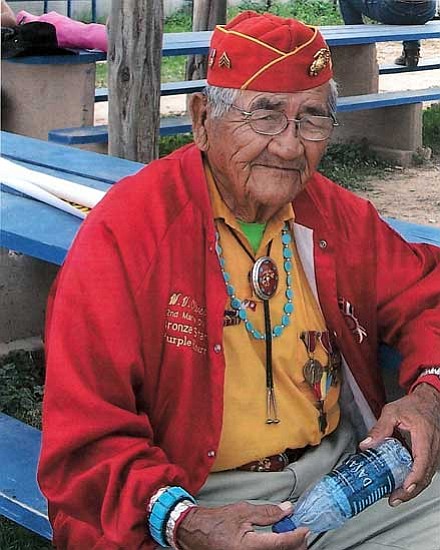 WINDOW ROCK, Ariz. - Navajo Nation President Joe Shirley Jr. on Wednesday ordered flags on the Navajo Nation to be flown at half-staff from Oct. 15-19 in honor and recognition of Navajo Code Talker Willard Varnell Oliver of Lukachukai who died on Wednesday. He was 88.

"The late Willard V. Oliver was a renowned Navajo Code Talker who served the United States of America, the U.S. Marine Corps, and the Navajo Nation during World War II with courage, honor and distinction," President Shirley said in a proclamation. "Willard V. Oliver endured the horrors of combat in the Pacific Theatre battles on the islands of Tarawa, Saipan, Tinian, Okinawa and Iwo Jima, and was the lead man in a radio platoon in a forward echelon against hostile forces."

Oliver died at the Northern Arizona Veterans Administration Health Care System Hospital in Prescott. He had been in declining health for the past two years, said his son Lawrence Oliver, executive director of the Navajo Nation Division of Human Resources. He was proud to be a Code Talker and had long been active in the Navajo Code Talkers Association.

Oliver grew up between Shiprock and Farmington, N.M. and graduated from the Shiprock Agricultural High School in 1940. He enlisted in the U.S. Marine Corps on March 23, 1943, and served in the South Pacific with the 2nd Marine Division. He was honorably discharged on Dec. 11, 1945.

In the fall of 1944, Oliver was wounded during the battle of Saipan.

He was wounded on his left thigh and carried a piece of shrapnel in his shoulder. He was awarded the Purple Heart and Bronze Star, although lost much of his hearing in his left ear from the artillery explosion that wounded him.

Following the battle of Okinawa, Oliver was with the first occupational force to arrive at Nagasaki, Japan, in 1945 after the U.S. had dropped the atomic bomb.

"We found that everything was flattened, twisted metal everywhere," he recalled. "We were told to be very careful as we advanced throughout the area."

After World War II, Oliver worked for the Santa Fe and Union Pacific Railroads. Later he became an ambulance driver and a police officer in Fort Defiance. He was also a construction worker, carpenter, and helped build a gas pipeline on the Navajo Nation.

Oliver's brother, Lloyd Oliver, is one of the original 29 Navajo Code Talkers. Oliver accompanied Lloyd to Washington, D.C. for him to be awarded a Congressional Gold Medal by President George W. Bush on July 26, 2001. On Nov. 24, 2001, Oliver himself was awarded the Congressional Silver Medal in Window Rock.

"I did not realize that until the Code Talkers were recognized that all the victories back during the war came about because of our Diné language," he said. "Sometimes I think about it. Why did the government want to use our language when throughout BIA school we would get our mouth washed out with soap when they caught us speaking Navajo?"

"I am proud to be a Code Talker," he said. "And I know we counted for something great, and that we fought to maintain our freedom and for our sacred land."

His funeral will be at 10 a.m. Saturday at the St. Isabelle Catholic Church in Lukachukai. Burial will be at the church cemetery. A reception will follow at the Lukachukai Chapter House.