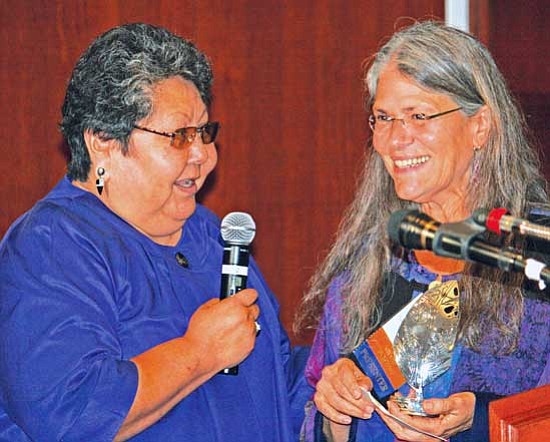 FLAGSTAFF, Ariz. - Each year since 2000, an outstanding clinician or practitioner who has distinguished themselves in the treatment of victims, families and communities is selected by the Hopi Foundation to receive the Barbara Chester Award.

The award is named for Chester, who served as the clinical director of the Hopi Foundation from 1992 until her death in 1997. She also founded and directed the Center for the Prevention and Resolution of Violence in Tucson, treating refugees crossing the Mexican-American border - including indigenes from Central and South America and torture survivors from Bosnia, Vietnam, Moldavia and more.

"After Barbara passed away, her friends and family built this endowment as a part of the Hopi Foundation," Rowena Dickerson said. "The award recipient is selected by a committee made up of ... members who knew Barbara."

Dr. Mary Fabri of Chicago, Ill, received this year's award on Oct. 3 in Flagstaff. She was selected for her outstanding clinical work as well as her significant contributions as a co-founding clinical member of the Heartland Alliance Marjorie Kovler Center - the torture treatment program in Chicago. She serves as the president of the National Consortium of Torture Treatment Programs, clinically administering the Bosnian Mental Health Program and being an advocate and trainer in the field of torture treatment.

She has contributed to efforts providing mental health treatment to survivors in Guatemala, Haiti, Rwanda, Iraq, Burundi and the Democratic Republic of Congo.

Previous recipients of the Barbara Chester Award include Alp Ayan from Turkey, Allen Keller of the U.S., Juan Almendares of the Honduras and Shari Eppel of Zimbabwe.

According to Dr. Spero Manson of the University of Colorado, Native Americans are at high risk to experience violence, early death and other traumatic events. Homicide rates are 70 percent higher for Native Americans as compared to Caucasians. Suicide rates are two to four times higher than for other ethnic groups. Native Americans enroll in the military in disproportional numbers, and are frequently in high-risk positions on the front lines-as scouts or point men.

According to the American Indian Vietnam Project, this is due to stereotyping. "The stereotypic American Indian 'scout' designation has often been given despite the fact that many of these individuals are from urban environments and have never performed 'scout' activity," Manson pointed out.

The conference illustrated that the topic of torture and PTSD is not limited to battlefield situations.

Judith Lewis Herman, MD, is the author of Father-Daughter Incest and Trauma and Recovery: The Aftermath of Violence-From Domestic Abuse to Political Terror. As one of the conference presenters, she provided hope for those involved in treating victims of violence.

"I am working in the field of the horrible things that one human being can do to another human being," Herman said. "A lot of our knowledge [on this topic] translates to military/political torture survivors [who have] taught me a lot about resiliency."

She works with "civilians," where many victims receive no therapy.

In the first stage of recovery, victims are encouraged to focus on themselves and their daily cycles of sleep, eating and exercise, Herman said.

"You won't see a lot of recovery if one does not feel safe," Herman said. "A lot of victims are unable to sleep and need to recreate a new cycle. Exercise is also valuable, as it allows mastery over biorhythm. Victims who use drugs and alcohol do not want to give these substances up since they tamp down life and PTSD symptoms. There will be no resolution because they are in an altered state. We have to remember that their bodies have been humiliated and degraded, and the victim no longer wants to attend to the body."

Herman suggests activities such as journaling, list making and other support systems for recovery.

"People who are taking more control over their lives; people who sought out someone to talk to-those two things have a strong effect on recovery," Herman said. "Twenty percent experience exceptionally good recovery where they found meaning in what happened to them beyond the personal experience-getting involved in social awareness, to help others."

The Barbara Chester Award consists of a U.S. $10,000 prize and a Hopi hand-crafted eagle feather sculpture in silver. It was established in 1999 to honor the work of Dr. Barbara Chester who helped pioneer the fields of torture treatment and sexual assault.

For more about the Barbara Chester Award, visit www.barbarachesteraward.org.