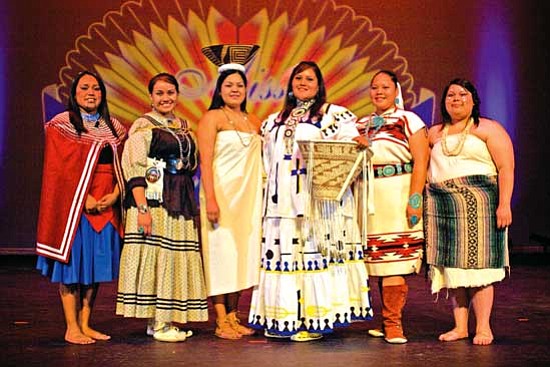 MESA, Ariz. - Daryl Lynn Jay from the Gila River Indian Community was crowned as the 2009-2010 Miss Indian Arizona during the 48th Annual Miss Indian Arizona Scholarship Program on Oct. 10. This year's theme was "Native Women - Keepers of our Culture."

Jay, 23, is the daughter of Michael and Priscilla Jay. She is seeking her Associate's Degree in Communications at South Mountain Community College with an emphasis in hotel hospitality/leadership. She is presently employed at the Sheraton Wild Horse Pass Resort as a Cultural Ambassador, and her ultimate goal is to become a lobbyist for her community in addition to being a youth leadership trainer.

"Writing poetry and music are a passion of mine," she said. Jay also plays and coaches softball as well as dancing traditional and contemporary dances. Her platform was "Strengthening Families."

Participants in this year's Program represented six of Arizona's 22 Indian tribes. This year's participants were:

Several other awards were given during the evening. They were presented as follows:

The Miss Indian Arizona Association is a non-profit organization under the sponsorship of the Inter-Tribal Council of Arizona. Association members work throughout the year to raise funds to produce the Scholarship Program, which provides scholarships to young American Indian women, allowing them to pursue their educational goals.

For more information about the Scholarship Program, volunteering, or making a donation to the Miss Indian Arizona Association, visit www.missindianarizona.com.