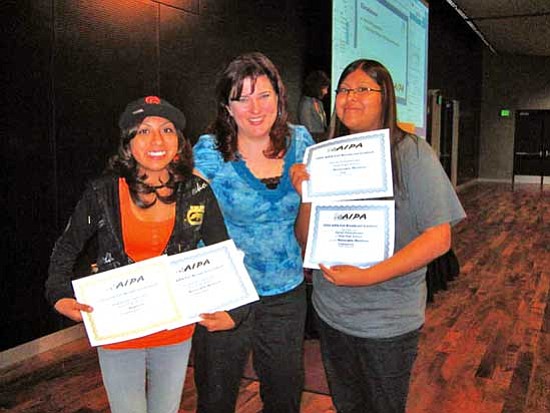 Latoya Rucker won superior or first place in the feature category for her story with a music message. She also won excellent or second place for her newscast about Hopi High students tour Oregon Public Broadcasting studios.

Rucker, a senior, said she felt happy about getting the awards, but added it was unexpected.

"I didn't realize it was going to happen. It didn't cross my mind that I was going to win. Then they called my name and everybody was clapping," she said.

Approximately 600 journalism, radio, yearbook and literary magazine students from throughout the state attended the event.

"I just went up and accepted the awards. Thank God there were no speeches involved," she said.

Rucker, an honor roll student, said she felt happy that her classmates won so many awards.

Rucker plans to major in radio broadcasting at either Arizona State University or Northern Arizona University.  She also enjoyed, along with her radio and journalism classmates, a tour of the ASU Walter Cronkite School of Journalism and Mass Communication where they saw a live newscast.

"It was cool to see a live show because everything was organized. Everything went so quick, everybody was communicating with each other and they knew what each other was doing," she said.

Jaysana Honyaktewa won superior or first place in the commercial category for her commercial on family fun night. She took an honorable mention or third place for her commentary about second hour personalities.

Honyaktewa, a senior, said she was shocked that she won, especially first place.

"It was cool and an honor to win because there were a lot of schools there and a lot of students representing those schools," she said. "It shows that radio on the reservation is great. It lets people know how fluent we are and it shows that we know the technology."

Honyaktewa said she felt honored that her radio classmates won so many awards.

"I'm happy they won and represented Hopi High School. I want to win more awards for myself and the high school," she said.

"Radio has been a great experience at Hopi High School because I get to meet new people and I like to talk," she said.

Vance Pooyouma won four awards. He won two excellents, or second places. One for a public service announcement about child abuse prevention and another for a feature story about Lancisco Omahoya wins art award. He also won two honorable mentions; one for a commercial about family fun night and another for a newscast about Alyssa Fredericks.

Pooyouma said he felt proud of himself because he had never won so many awards previously, adding that he was proud of all the awards won by his classmates.

"I hope they continue and win more awards," he said.

Pooyouma hasn't decided where he wants to go to college, but he wants to major in anthropology.

Darian Poleyestewa took two honorable mentions. One was in the public service announcement category for child care prevention. The second was in the commentary division for students learned radio.

The radio class thanks KUYI for its technical support and training on radio skills that helped them reach this level to obtain these awards.

The advanced radio class works on production for news, sports, commercials and public service announcements. Both classes call in news briefs to KINO in Winslow.

The school matches dollar for dollar any donations. It will cost about $1,200 to send each student so students can be sponsored for $600 each.