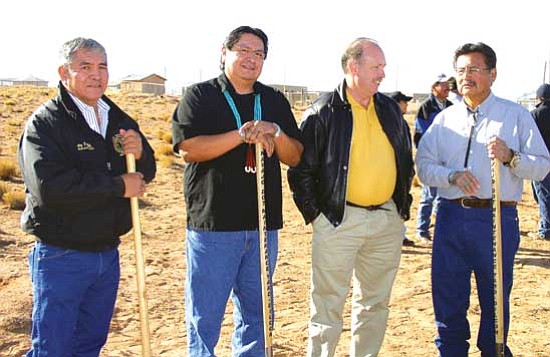 DILKON/PINON CHAPTERS, Ariz. - Chapter officials and community members from the Dilkon and Pinon Chapters, representatives from the Navajo Department of Transportation (NDOT), various elected officials and staff from Navajo County and the Navajo Nation celebrated the dedication and ground breaking of two new road maintenance facilities cooperatively funded by Navajo County and the Navajo Nation on Nov. 9.

The road yards, located in the Pinon and Dilkon Chapters, are being funded through a historic and unprecedented agreement between Navajo County and the Navajo Nation. Under the agreement, Navajo County and the Nation are splitting the cost of construction, with each agency paying half of the project's cost. Upon completion of the facilities, the Navajo Department of Transportation will begin using the facilities to maintain existing Bureau of Indian Affairs roads, many of which are in disrepair.

"This is a historic day, a day to celebrate the partnership between our agencies," said District 2 Supervisor Jesse Thompson, whose district includes the Dilkon Chapter. "Look how much we can accomplish when we work together."

"We need a streamlined maintenance process, especially in times of road emergencies," he said. "These facilities will help our residents travel more safely in the winter months."

Following the ceremonies were receptions at the Pinon and Dilkon Chapter Houses.

"I want to congratulate all who have contributed tirelessly to get this project to this point," Attorney Carlyon said. "Your efforts are greatly appreciated."

The projects began on Nov. 11 and will take about 300 days to complete.