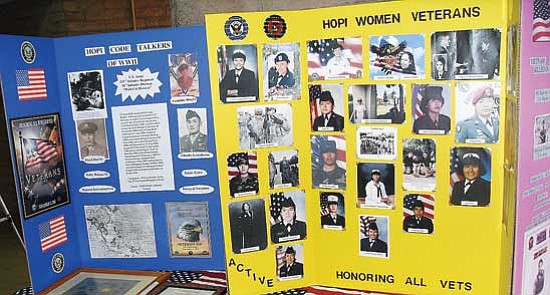 <i>Rosanda Suetopka Thayer/NHO</i><br> A display table shows a brief history of the Hopi Code Talkers along with a presentation honoring Hopi women veterans.

Travis Yaiva, the only remaining Hopi Code Talker, still lives on the Hopi Reservation. The other seven have passed away.

All are now immortalized on a 4-by-6 foot bronze plaque inside the Hopi Veterans Center, which will be eventually moved outdoors to a permanent concrete base for the public to enjoy.

Emcees for the event were Clark Tenakhongva and Hopi Health Care administrator Bruce Talawyma, both veterans.

They spoke of the honor and service that these Hopis brought back home to their reservation with their bravery and commitment to service and defense of this country.

Tenakhongva, a Hopi veterans outreach counselor stated, "This special honor today for our Hopi Code Talkers shows that our Hopi language has now become a code amongst our own people. If we are to remain Hopi, our people must help in every possible way to retain our most valuable resources ..."

"If we are to remain Hopi, our people must help in every possible way to retain our most valuable resources like our language, our land, our ceremonies and religion. It was through the dedication and commitment to service that these Hopi men came to help bring the understanding of peace to the world ... We are the chosen people, we should be proud of our strong, rich heritage to continue into the next century, only time and history will tell, how Hopi will react to this global warfare that has been around since the inception of the American government."

Former Air Force Staff Sargeant Sharon Fredericks-Batala, Hopi, wrote a commemorative stanza that is inscribed on the Hopi Codetalkers Bronze plaque, commemorating the loyalty and service that these eight Hopi servicemen gave to their country.

She stated, "I was lucky enough to know four of the Hopi Code Talkers personally up to the time of their deaths. I was so privileged to get to know them and their families. They were each so very humble. All of these men, spoke the Hopi language extremely well ... so it didn't seem like a hardship to create a special code to help their fellow servicemen win the war. But when they came home, they realized that many of their own children and grandchildren did not speak Hopi ... so this bronze plaque honor will hold even more importance. It will become an inspiration for our community members to speak Hopi daily, to remember the Hopi spirit that stays with us. I am so honored that I was able to write something for this special code talker plaque to remember these men, to show them what respect means, and to help them keep their own humbleness in a good way."

Wives and daughters of Hopi servicemen helped serve a Hopi traditional meal during the event and the attendees were able to view a presentation that showed both vintage and current photos of Hopi servicemen and women. This special slide show was created by Gordon Mahkewa, U.S. Army retired.