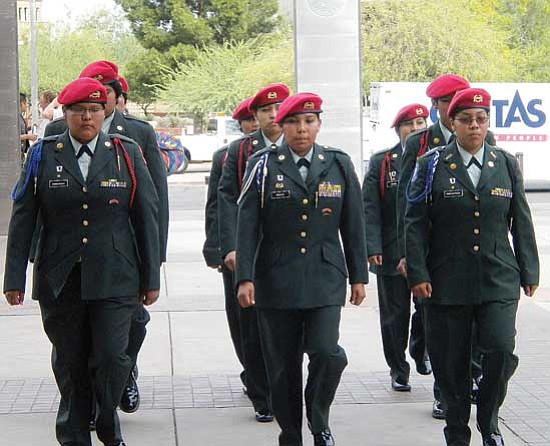 On Nov. 6, the Hopi High School Junior Reserve Officer Training Corps (JROTC) Honor Guard and Drill Team attended the celebration of Native American Veterans throughout Maricopa County. The event was a one day celebration for the Native American Veterans, which include the array of entertainment, guest speakers, Honor Guards, exhibits, arts and crafts vendors and music.

The Hopi JROTC Honor Guard posted colors along with four other Honor Guards. The Hopi JROTC Drill Team did a Free-Styled performance, which pertained the basic marching, and commands. They performed it for the veterans, vendors, and by passers.

They did a splendid job and they do receive a lot of requests from the JROTC program to do different kinds of community services and performances.