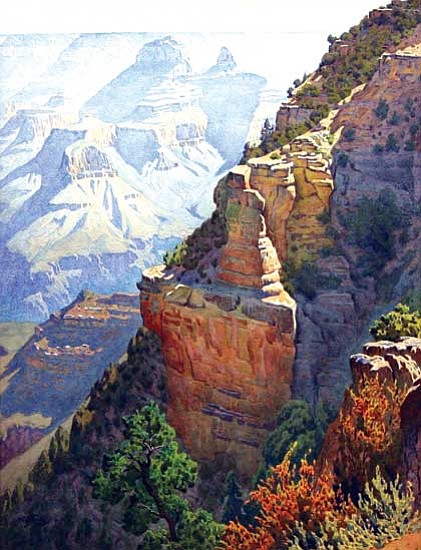 FLAGSTAFF, Ariz. - The unrivaled Widforss legacy of landscape realism is highlighted in the Museum of Northern Arizona's newest exhibit, Gunnar Widforss-Painter of the National Parks, which opened Nov. 21. The exhibit will run through June 1, 2010. The last major Widforss exhibit was at MNA in 1969. Fifty-one paintings and drawings from the Museum's Fine Arts Collection and ten Arizona collectors will showcase the accuracy and detail of Widforss's painting and the greatness of his body of work.

During the Roaring Twenties and the Great Depression, when the European avant garde ruled the art world, Gunnar Widforss (1879-1934) chose to focus his passion and his energy on the national parks of the West. And at a time when watercolors were most commonly used as a medium for preparatory sketches, Widforss chose to paint most of his masterpieces in watercolors with nearly photographic detail.

Originally from Stockholm, Sweden, Widforss traveled to Russia to work as a decorative painter, and then on to Austria, Switzerland, the Mediterranean region, and North Africa, in search of grand landscapes to paint. He led a Bohemian lifestyle, trading paintings for rooms and meals.

In late 1920, he arrived in America en route to Japan, making his way to California before his funds ran out. He painted the California Coast and Catalina Island, arriving soon after in Yosemite Valley where he became friends with Stephen Mather, the first Director of the National Park Service. Mather became one of his greatest advocates and suggested to Widforss that he focus his artistic attention on America's national parks. It was advice Widforss took seriously for the next thirteen years.

By this time, two themes in Widforss' work had emerged. He painted portraits of trees, from Monterey cypresses, to giant sequoias and quaking aspens, and he searched out architectural rock formations and deep atmospheric spaces, which he was able to capture with compelling accuracy. These themes traveled with him to the Grand Canyon, where he made his home on the South Rim. He exchanged paintings with the Fred Harvey Company for an employee dormitory room and meals at Bright Angel Lodge. His works were exhibited in the art gallery in the lobby of the El Tovar Hotel at the time.

MNA Fine Art Curator Alan Petersen states, "Gunnar Widforss may be the Grand Canyon painter par excellence. His style was particularly well suited to painting the canyon. And unlike most other artists working at Grand Canyon, he painted many scenes from within the depths of the canyon. On the Trail to Grandeur Point reveals his virtuoso ability to create a tangible sense of deep space. The canyon offered the dynamic visual contrast of limestone cliffs, Zoroaster Temple and Brahma Temple formations in the background, and the horizon 20 miles distant."

In addition to Yosemite and Grand Canyon, Widforss went on to paint in many of the western parks including Zion, Bryce, Mesa Verde, Crater Lake, Carlsbad Caverns, Sequoia, Death Valley, and Yellowstone, earning him the title of "Painter of the National Parks."

MNA Director Dr. Robert Breunig had this to say, "Gunnar Widforss is a master watercolorist. He used a very demanding medium, and his works are without a doubt among the finest watercolor paintings I've ever seen. He had this amazing way of evoking the spirit of a place-connecting the viewer with the place, on a very emotional level."

In 1929, Widforss became a naturalized citizen and celebrated his fiftieth birthday. Just a week later, the great Wall Street crash doomed him to relative obscurity as sales declined.

In 1934 while in St. Louis for an exhibit of his work, a doctor warned Widforss that he had a serious heart condition that would require him to move from the Grand Canyon to a lower elevation. This came as quite a blow, for the canyon had become his favorite subject and he loved his friends there. He returned to the canyon to collect his belongings and say goodbye to his friends. While driving from El Tovar Hotel to Bright Angel Lodge, he died suddenly from a heart attack at the young age of 55.

Widforss' obscurity is a paradox, given the fact that he is one of the greatest artists to paint the West. The story of his life and work is one of great triumph in realistic painting, punctuated by the tragedy of his anonymity and death. His is a compelling story of a Swedish expatriate who fell in love with the American landscape and devoted the peak of his career to painting the dynamic interplay between landscapes and atmosphere. His contemplative visual poems of magnificent Western vistas are what remain.