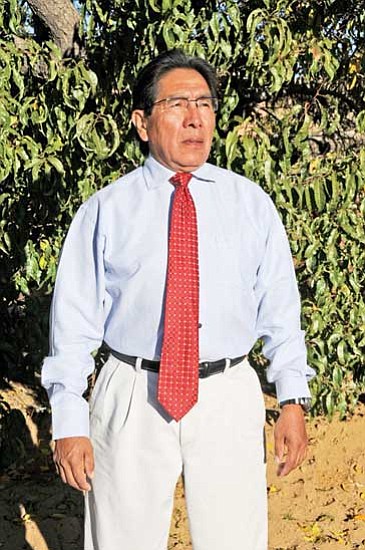 KYKOTSMOVI, Ariz. - The Hopi Tribe has a new chairman and vice chairman with the elections of Leroy Ned Shingoitewa (chairman) and Herman Honanie (vice chairman) on Wednesday.

The two faced off against their opponents from the primary election, which was held Nov. 4.

Shingoitewa garnered 1,084 votes to win the chairmanship, besting challenger Clark Tenakhongva who tallied 560 votes, according to official returns released by the Hopi elections office. In all, 1,636 votes were cast.

For the vice chairman's position, Honanie received 1,010 votes compared with his opponent, Leroy Sumatzkuku, who got 634 votes, the elections office said. Sumatzkuku, a current member of the Hopi Tribal Council, will retain his council seat.

Each position is for a four-year term. Shingoitewa and Honanie will be sworn in Dec. 1, along with new council members who were elected from their villages over the past couple of weeks. Dec. 1 marks the first day of the first quarter of the council session in accordance with the Hopi Tribal Constitution.

During the campaign, Shingoitewa said one of his main goals was to find ways to generate more revenue for the tribe. Honanie, director of the tribe's Office of Health Services said a key issue for him was ensuring that the tribal government communicates with the people.

Honanie, in an article announcing his candidacy stated, "A strong sentiment exists among us that our tribal government is in disarray. Tribal collaboration and morale is at an all time low. Our tribal government needs to be held to a high standard of trust, reliability, efficiency, accountability, integrity and transparency. Ultimately, it is my hope that we will once again move along a progressive path by restoring, to the people, faith in the government."

Still at issue is that the chairman is presently also the chief executive officer of the Hopi Tribe. A reorganization task team headed by Tribal Council member Davis F. Pecusa will propose a resolution at a special Tribal Council meeting on Sunday that would create a separate position of executive director who would oversee the work of the tribe's departments and programs and report directly to the Tribal Council. If passed, the chairman would no longer would be CEO.